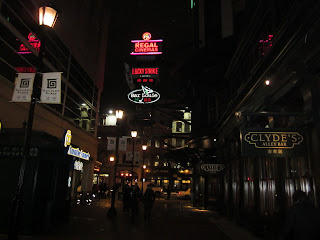 I remember the moment on Dec. 13, 2001, when I lost access to my work account while helping a customer.  Twenty minutes later I was in a meeting in a corner office with HR, verifying what I had calculated: 35 weeks severance, and outplacement.
I had some cushion, but I would learn the ways of interim jobs, of more regimentation, and the “free market cultural revolution”, which was not as brutal as what Chairman Mao would have prescribed for me.
But in The Weinstein Company’s didactic docudrama "The Company Men" (directed by John Wells), Bobby Walker, played by a 37-ish Ben Affleck in his last days as relatively young man, has a big mortgage, a bright tween deserving college prep, and a prudent wife who can bring in some income as a nurse. He comes in to a board meeting cocky, talking golf, and is soon routed to his severance package which is only twelve weeks.  And the Outplacement Company is more overbearing than Right Management was for me. Why do you need to sit in an office all day and pretend? Also, nobody mentioned the importance of online reputation and Facebook in job hunting these days. Instead, the movie focused on a backdrop of the financial crisis of 2008. Others were to blame.
Affleck’s character was a regional sales director, people-person enough to manipulate others (with phony charisma) and compete. But he will take his turn becoming a prole, working construction for his brother in law. He’s a lousy carpenter. This is no “This Old House”. It’s grunt work. You pay your bills, you pay your dues, too.
Two older executives at GTX, played by Tommy Lee Jones and Chris Cooper, have it even harder.  Tommy’s character really talks about the immorality of all this. Chris was more cocksure, but is shocked when the outplacement counselor tells him to dye his hair to hide his age (oh, my, he's almost 60! ..Oh, the companies follow the law. They get around age discrimination by dividing the workforce into cohorts of one person apiece.)  Turning on your car in a closed garage is not a very inviting way to make sure your family is taken care of.
Perhaps with my aspie nature I was better off, not having gotten in so deep. But in the film, the "company men" carry out the domestic intimacies expected of them; Ben's character assures his son that he is still "your Dad", and Tommy's avatar is receptive to attention "in the bedroom" from his wife despite his not having much now and looking away over the hill.  All conventional and expected for "sustainability".


The film plays like a PBS documentary (there was one in 1987, where a laid off executive takes a year to “replace” another victim, a drama produced at the College of William and Mary). There are always remnants of snow in the Boston scenery, but sometimes the film gets its seasons squirreled, keeping Christmas trees up into what would be spring (after the severance ran out). Oh well, Christ was born in April, anyway.
The official site for the movie is here. I can mention worthy predecessors, like "The Man in the Gray Flannel Suit" (indeed a Company Man) and even "Babbitt". Maybe even "The Grapes of Wrath".  Another possible comparison is Mark Rydell's 1984 film "The River" with Mel Gibson, from Universal, or perhaps even Paul Schrader's 1978 film "Blue Collar" for Universal (with Richard Pryor).
Pretty good crowd at the Regal Verizon Center in Washington early Friday night.
Posted by Bill Boushka at 9:24 PM