"Another Year": Marriage, documented in Altman style, but from London 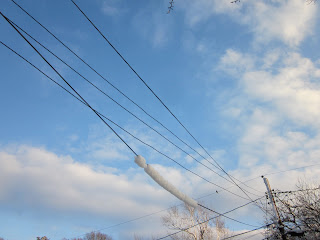 It’s interesting that you can make a movie about a ripening marriage by threading all the little stories of people who know the couple, in Robert Altman style. “Another Year” is a “four seasons”, starting with Spring, about Tom and Gerri (Jim Broadbent [“Longford”] and Ruth Sheen) in north London.  But the film starts with another older woman (Lesley Manville) being prodded by the British National Health Service to see a counselor, that is, Gerri. So many other characters, including Gerri’s son, a somewhat foppish lawyer, are worked into their lives, which comprises constant conversation, like a stage play. In the “autumn” segment there is a funeral that produces a family confrontation, with another possibly gay member Carl (Martin Savage).   The funeral service was built around the music of Bach and Elgar; my own mother’s was based on Schumann and Andres, and there were certain eerie parallels to my own circumstances, which I won’t detail here. But the lives of the characters are much more intertwined adaptively than I would be comfortable with.
The film is long, and in full 2.35:1, diluting the closeups, but effective in the wide outdoor shots of a busy England.  You feel conscious of driving on the left side of the road, wondering if you could rent a car in Britain.
I strikes me that the film is about "marriage" in a way that oddly complements "Blue Valentine".
The film, from Sony Pictures Classics, Focus, and Film 4, is directed by Mike Leigh.
Sony’s site is here.
AFP has a Cannes Excerpt on Youtube
Posted by Bill Boushka at 8:56 PM