"The Tourist": Johnny Depp is two-faced as a Mr. Everyman, and Angelina Jolie is a kind of Valerie 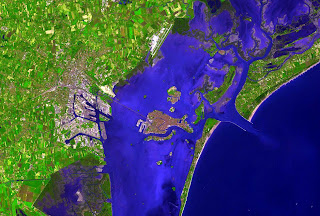 Johnny Depp is another Hollywood “Everyman” (literally, as I read it in high school, maybe), a little quirkier than Tom Hanks, a little more astringent than Leo, and in “The Tourist”, from Columbia (GK Films and Spyglass), directed by Florian Henckel von Donnersmarck, his is indeed two-faced, like the Janus lock in a couple of hotel rooms in the movie (rather like a similar lock in “The Most Dangerous Game”).

One the one hand, he Frank Tupelo, is an ordinary 40 year old, on vacation in Europe after losing his wife to an accident, and teaching math in Wisconsin (of course), and an avid fan of spy novels. Maybe he’s a computer hacker. But there’s another side. People’s appearances can change and they can be the same person, across a time arrow, or maybe after surgical intervention. (Remember ‘Face Off”?) I’ve never heard of someone’s losing four inches of height to plastic surgery, though.

Enter Elise (Angelina Jolie), a kind of Valerie Plame, working inside, and part of her job is to fall in love with men she meets as an operative. Here, we think she’s supposed to befriend a man on a speed train from Paris to Lyon who looks like a man running from Mafia loan sharks, so that the invasive police sitting nearby will think they have their man. Really, how probable is that?

I love train movies (like “Murder on the Orient Express”), but here we suddenly are in Venice, with your typical spy movie using the geographical anomalies of the setting to score plot points.

Yes, a movie like this is all about plot, story, and manipulation. But it’s a little bit less of an adventure than the classic films like this in the 60s (“Charade”, etc).

The official site is this.

Artisan offers this trailer about the stars’ work in the film: