"Picture Me: A Model's Diary", shows the underside of the world of fashion modeling (not as glossy as "Septemeber Issue") 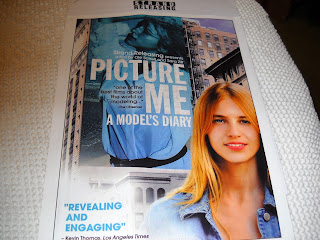 Strand Releasing has a DVD of the film by Ole Schell and Sara Ziff, “Picture Me: A Model’s Diary” (from 2th Frame and Digital Bazooka), a documentary about the lives of new female fashion models.

The models explain how they are in constant debt, especially to their agents, as they start out in the business.

Many of the models come from Eastern Europe (as from Belarus), as well as South America (Brazil). Some start modeling as early as 14. Some are exposed to controlled substances and risky behavior, at ages that would seem to be illegal. On the other hand, one father regrets his daughter’s desire to enter modeling, even if she eventually makes a lot more money because of “lookism”, rather than continue her education. Finally, the young woman, at 27, gets into higher education (Columbia), after learning how to write an “application essay”. She has to face the idea that her life will have new phases.

The models also describe the process of casting fashion shows (just a touch of “September Issue”, maybe, and maybe a bit of “Married at the Mall”); one of the models had just graduated from film school.

One model says she feels she is becoming a “living doll” and that the “powdered shell of herself takes over”. Then she says that others in the industry don’t see models “as people.” That reminds me of my own father’s concern 50 years ago, “You don’t see people as people.”

There is a lot of ageism, and women lying about their ages to get work. A woman said that when she signed in as 24, she was the oldest on the intro sheet. Eventually people say, “She’s over.” The models then feel “disposable.”

Then a model says “I almost yawned on the runway today.”

The film occasionally uses a “clownish” style of animation.

The film is shot in New York and Milan.

The official site is on Myspace, here.

The DVD has a brief extra on the Gen Art

The DVD was made available to me as a sample from Strand. Some of the color looks a bit overexposed. It will be available for sale Jan. 11, 2011.
Posted by Bill Boushka at 2:02 PM