NBC's "A Walk in My Shoes": a teacher learns an "alternate reality" lesson in the burdens on "real" families

On December 3, NBC aired a little new film by John Kent Harrison, “A Walk in My Shoes” (called just “In My Shoes” on imdb). 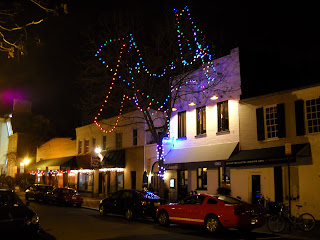 Here’s another one of those “alternate reality” scenarios, intended to score more points. A female English teacher Trish Fahey (Nancy Travis) in a Portland, OR high school refuses to give a student (Cameron Deane Stewart) more time for a term paper. The teacher says that “self-reflection is a good thing” but the kid says it is too hard. Because of the incomplete, the kid gets suspended from the basketball team.

Suddenly, after some mayhem in her auto, the teacher meets a mysterious angelic woman and becomes the mother of the boy, and walks into the family like an amnesiac, having to learn with the challenges of many people who marry and have kids and have to play the everyday economy without the privilege of “the knowledge of good and evil.” She will have to deal with the family’s eviction by a kindly sheriff, and an ex-Marine next door who explains the ties of family for men overseas.

What's clear from this movie is that many kids don't have as much opportunity to focus on themselves at school because of family pressures caused by difficulties of parents. Remember "October Sky" where Homer Hickum's brother has to offer to drop out of school and work in the coal mines when his dad is sick from black lung?

I’m reminded of other films where a “real life” situation is “dumped in someone’s lap”, usually people having to take over raising siblings’ kids (such as “Raising Helen” and the WB series “Summerland”).  This film was sponsored by Walmart as "family night", but actually Rogue's "Catfish" turns out to be a gentle family tale.

I’m not sure that the sci-fi approach here is as effective as the more mundane treatments such as those above. How about a sibling’s kids situation where the would-be take-over parent is gay and has never considered having a conventional family? That would make an obvious scenario for an indie movie.

Site for the film is here.

Last week, at the last minute, Hallmark TV pulled a film with a somewhat similar premise, “A Family Thanksgiving” (see my TV blog Nov. 27).  There a career lawyer goes into alternate reality to become a wife and mother.

Try this video for most of the major studios’ trademarks. NBC Universal is near the end. (Is this TV film from Universal, or from Rogue, the indie sci-fi label for Universal?) Would this introduce “Do Ask Do Tell?”  (Note: The WB music is for DVD, not nearly as effective as the Casablanca theme; and Lionsgate is missing; and Summit needs to write a musical trademark.)

Wikipedia attribution link for picture of Portland, OR.  The picture certainly looks like Cineramascope, doesn’t it.
Posted by Bill Boushka at 8:17 PM