"Howard Zinn: You Can't Be Neutral on a Moving Train" (and "A People's History of the United States") 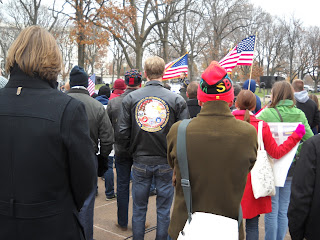 “Howard Zinn: You Can’t Be Neutral on a Moving Train” is another straightforward documentary (78 minutes) of a major American “progressive” activist (b. 1922), directed by Deb Ellis and Denis Mueller, narrated in large part by Matt Damon. The film, from 2004, was distributed by First Run Features.

The title of the film sounds almost like it comes from relativity theory. Let's say you can't be indifferent, to how you can depend on the unseen sacrifices of others.

Some of the most interesting part of the documentary involves his teaching at “black” colleges in the South, while keeping a relatively low profile at these colleges. Later the film deals with the effect of the Vietnam War American bombings on civilians.

His famous book is “A People’s History of the United States,” and he is shown talking to college students about his book (like in “my lecture” at Hamline University on my own book in 1998). Damon’s narration points out that the book necessarily must be one-sided, to show life from the viewpoint of stepping into other people’s shoes.

Zinn does talk in general terms, of “class conflict”, “the power of the establishment”. “People who have no power … once they organize … have a power no government can suppress.”

Zinn said he was “looking for a people’s history and it didn’t exist.” Damon says “there is no such thing as impartial history.”

“To be radical is to grasp the root of a problem, and the root is us.”

On the DVD, Mr. Zinn talks about the past history of the military male-only draft as an example of the idea that men do not naturally want to go to war and fight for its own sake, and he also discusses the past penalties for draft evasion. He also discounts the conservative idea that the poor are responsible for their own plight as individuals (but so does the New Testament!)

The DVD includes Zinn's speech at "Veterans for Peace" in Boston in 2004.
Posted by Bill Boushka at 5:52 PM