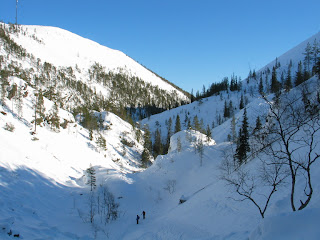 It’s a bit of hidden wisdom that the Nutcracker ballet story takes place on New Year’s Eve, and I saw the Finnish horror fable “Rare Exports: A Christmas Tale: The Truth about Santa Claus”, on New Years’s beggar’s night, that is, “hier soir”. The wide-screened but brief sci-fi-like adventure directed by Jalmari Helander is set in a backdrop of mountains (said to be the Korvatunturi) taller than those anywhere in Finland (Suomi), so they are probably CGI creations.

The beginning of the movie reminds one of “The Day After Tomorrow” as scientists find in artifact in a mountain perhaps of sawdust. We may be headed for Clive Cussler territory. A little boy Pietari (Onni Tommila) pesters his single dad about the discovery, and even gets grounded; but pretty soon the secret gets out. A golem has been found, and then there are more. They may be older men whose lives have past expiration dates, and becoming Santas gives them some more time.

Now, I’ve never wanted to be a Santa; it would be problematic. But this movie predicts a possible fate even for me, particularly for the childless.

I visited Norway and Sweden (as far north as Kiruna) in 1972, but didn’t have time for Finland, whose tlanguage is a bit of a mystery. Some of the people in the Northern Lapland have a partially Asian appearance.

A Disney “Santa Clause” movie this is not!

The distributor is Oscilloscope and one of the production companies was Icon.

An earlier Finnish film that I saw in Minneapolis in 2002 was Joki (“The River”), directed by Rooka Poulsen, which presented interlocking stories from Finnish life (including a gay couple) with a time circle.