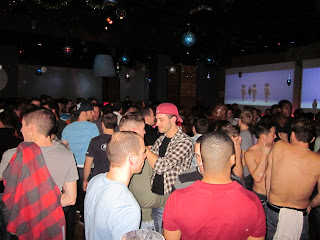 The DVD (from Entertainment One, perhaps connected to Summit ) may be of current interest now because Colin Firth (“The King’s Speech”, reviewed here Dec. 20) plays the indulging Lord Henry Wotton (“The only things worth living for are Youth and Beauty” – Wilde’s value system). Ben Chaplin is the painter Basil, and Ben Barnes is the perfect Dorian. And perfect means looking like a teenager, without pimples, but also with never a hint of a widow’s peak. The image in the painting, of course, goes bald by recession.

In this version, Dorian “swings both ways”, disappointing Sybil, who, in the book, loses her acting ability (after “Romeo and Juliet”) over Dorian. Now that itself is a bizarre concept, than an actor can lose it (maybe like Schwarzenegger, to become a politician). In the film, Henry turns Dorian against the idea of taking “responsibility” by having children (feeding the “demographic winter” arguments). Basil confronts Dorian after the gay trysts, when Dorian says “I’m a god” and dispatches Basil.

The concept of falling in love with a picture, or an image, fixed in time, though, is provocative. It’s about fantasy, a kind of hedonistic passivity that prevents “real life”. At the opposite, one marvels that couples can age together and find one another interesting even as they age.

If one is going to look perfect forever, one won’t indulge in cigarette smoking, which is bad for the circulation in the legs.

Of course, the “painting” expresses another concept, perhaps a time-lapse of how one will age, presenting the idea that over space-time we are all young and we are all old (if we live long enough). And we will look it. It strikes me that Dorian Gray is a kind of Benjamin Button in double reverse.

In the film, mirrors, little hand ones, look almost like iPhones. Toward the end, the time scale of the film accelerates, and cars (and the London Underground) are introduced. Dorian cannot play the piano without blood on his hands. (The soundtrack has him playing a jazzy "St. Louis Rag" in waltz slow waltz rtythm.) In a penultimate scene, Dorian notices a subtle change on his chest, not welcome by him; actually, the "sign" had appeared in the "bacchanale" scene [where Basil "approaches" him] at the film's midpoint.

“Pleasure is different from happiness. Some things are more precious because they don’t last”. Later, Dorian says to Lord Wotten, “I am what you made me. I tried to be a good person.”

It’s interesting how one can compare people to pictures, which happens a lot in this movie. The film also animates the painting (a concept that occurs in the Harry Potter movies). A featurette on the DVD shows how the director combined action, green screen, 3D CGI, and animation.

In one of my own manuscripts, I explore the idea that a “new angel” maintains youth permanently, and absorbs the experiences of other souls that consolidate into him and live (contracted) occasionally in him. The new angel does not have children, but must draw on the consciousness of other that did (so one of the “ordinary people” in the characters is challenged to father a child at last). The ordinary angel has had children but in time become vulnerable to temptation. The angels seek permanence, not a continuous future.

But in the end, Dorian Gray becomes a kind of Casino Jack.
Posted by Bill Boushka at 8:34 PM