"Casino Jack": A biographical satire (like "Social Network") with no one to love; a body slam to super-lobbyists 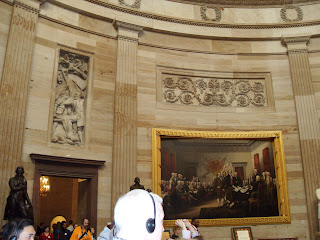 I could compare “Casino Jack” to “Fair Game” and “The Social Network” as another example of “historical satire” with artistic license, but compared to the other two films, this latest one over the Christmas seasons is pure slam dunk, with no characters to like. You laugh at them, not with them. At one point, Jack Abramoff’s wife (Hannah Endicott-Douglas) tells Jack (an aging Kevin Spacey), “we have no friends, just people we do business with.”

The action in this movie is frantic, jumping from Washington to Miami to Michigan constantly, racing to make itself into docudrama. The opening scene shows Jack talking to himself, not filling up the anamorphic image, about not wanting to fail competitively and be brought low.

So super-lobbying, not just selling ideas from people on K Street who say “we give you the words”, but buying people off, becomes the way to self-concept. Call it social manipulation, to the extreme.

The characters in “Casino Jack” are deteriorating physically, going bald in the legs (despite Jack’s protestations that he works out every day), whereas in “The Social Network”, the characters are all at least young and virile, and for all their conniving, they created something, a model of human interactions that seems to remove one from responsibility for their results.

In fact, sidekick Michael Scanlon (Barry Pepper) is almost a caricature of the “cigarette smoking man” from X-files, while both Abramoff and DeLay become icons of hyprocrisy.

In the final scenes (Abramoff’s downfall starts with a simple phonecall to his Blackberrry when he is trying to pitch a Biblical movie script to Paramount to star Russell Crowe – he teaches screenwriting in prison, about the beginning, middle and end). But the funniest scene may be the real question from John McCain, given his performance in the final hearings over “don’t ask don’t tell” later.

Abramoff tries to play the Chopin G Minor Ballade in one scene, and the Chopin gets orchestrated later, along with some switched-on Bach.

It looks like I missed the Alex Gibney documentary “Casino Jack and the United States of Money” (Magnolia Pictures), but it’s now in my Netflix queue (it can be played instantly).

The new film is directed by George Hickenlooper (Canada, Ontario) and written by Norman Snider.

The film is distributed by “Art Takes Over” (ATO Pictures) with site here.

Fallsview Casino-The fallsview casino resorts are the famous and all over the world are so popular and facility for gaming in Canada.