"Bhutto": As much a history of Pakistan as a biography 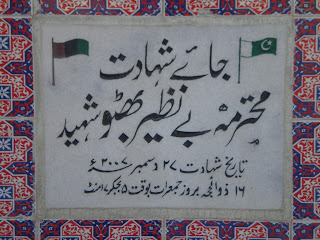 “Bhutto”, from First Run Features and Yellow Tag Films, and directed by Duane Baughman and Johnny O’Hara, opened this week at Landmark E-Street in Washington. The website for the film is (website url) here.  A Sunday Evening performance was almost full. Baughman and Mark Siegel were present Saturday night and Sunday afternoon for Q&A in Washington.

The film is a biography of Benazir Bhutto, twice prime minister of Pakistan, and assassinated in a complex and disputed event at the end of 2007 when she tried to return to the country after a supposed agreement with Musharraf to drop corruption charges. There was another attempt before which she escaped. It seems as though there was no way she could escape her fundamentalist enemies.

But the film is also a history of Pakistan, “The Land of the Pure”, formed when Britain let go of the Indian subcontinent, to separate the Muslim population from the Hindu. Much of the history concerns Pakistan’s desire to match India in having nuclear weapons, which it finally got. But Bhutto, a rare female head of state in a Muslim country, modernized the country for ordinary people, particularly with high tech as well as health care. Nevertheless, much of Pakistan (the world’s seventh most populous country) lives in poverty. The film shows a lot of the country on location.

Bhutto was not a feminist, the film says, even though she was very much an individualistic intellectual. She often spoke of the glory days of Islam, in the middle ages, when it led the world in culture while Europe was in the Dark Ages.

The film has a still shot of RFK in the 60s that is not that flattering.

AlJazeera English provides this YouTube video on the end of her life: