"Tibet in Song": Chinese suppression of Tibetan music and culture, by Choephel, who was imprisoned for 7 years 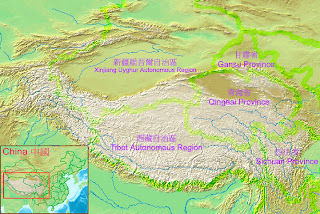 A new documentary “Tibet in Song” by Ngawang Choephel traces the history of Chinese suppression of Tibetan folk music and more specifically the imprisonment of the director from 1995 to 2002 after he was arrested for “spying”.

The history of Chinese sovereignty of Tibet is somewhat lengthy, and sometimes controversial as there certainly existed feudal and slave-like abuses in Tibetan society before Communism. Nevertheless, over the decades the Chinese have gradually overwhelmed Tibetan towns with broadcasts of Chinese music and culture and often arrested those who continued to practice Tibetan culture as “enemies of the people.”

Others imprisoned by the Chinese give horrific accounts of treatment in prison, with electric prods that left some people unable to speak. People were tortured for refusing to sing the Chinese national anthem.

The film does cover Chinese Communist ideology (as with the Maoist Cultural Revolution) with some force, mentioning Mao’s objection to “art for art’s sake.”

The film has a lot of black and white footage of Chinese military operations in Lhasa in the 1950s, with the Potala often in the background.

The Tibetan music may not sound so different from Chinese to Western ears, used to diatonic tonality; both sound highly modal, although Chinese propaganda songs are indeed highly patronizing. Still, night clubs exist around Tibet where the folk music may be heard.

The website (Gude Films) is here I saw it at the Friday afternoon show at the E Street Cinema in Washington, lightly attended. But Landmark says “Director and former Tibetan political prisoner Ngawang Choephel will appear In Person Friday, November 19 for Q&As after the 5:30pm and 7:45pm shows.”

Wikipedia attribution link for Tibet map.
There is also a film "Missing in Tibet" mentioned in Wikipedia, about the director.
Posted by Bill Boushka at 5:05 PM