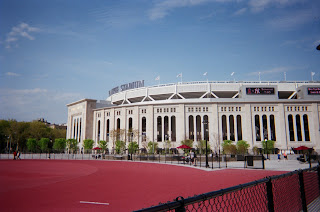 Recently, Turner Classic Movies broadcast “The Babe Ruth Story” with William Bendix (“The Life of Riley”) as a pithy Babe. The black and white film from Allied Artists, directed by Roy Del Ruth, comes across by today’s standards as choppy and sentimental. But it plays well during the World Series. He starts out as a poorly adjusted boy in Catholic School but finds his chance with the upcoming sport of baseball, and quickly gets into the minors, when the Orioles were a minor league team. Pretty soon he gets bought by the Red Sox, where he was a great pitcher before he became the outfielder and home run hitter with the Yankees.

The movie plays on his influence on others, such as the kid who walks for the first time. Early, it makes a lot of his overeating; it’s unusual for such a great athlete to have his pot belly. There’s a line where he takes a pot shot at cigarette smoking, surprising for a 1948 film. The movie has a few great shots of the old ballparks, particularly a game at the old Yankee Stadium (“The House that Ruth Built”, but not since 1974) recreating a season ending game with the Washington Senators (who actually were good in the 1920s) where he hits #60 on a 3-0 count. The movie takes some liberties with fact, such as his “resignation”, and it premiered just before he died in 1948 of an unusual throat cancer when he had agreed to try a new (for the time) chemotherapy for the benefit of others. Medically, chemotherapy would not become commonplace until the early 1960s.

Since San Francisco Giants’s Cy Young award and World Series pitching hero Tim Lincecum is slender and much cuter than Babe Ruth, I’ll give a YouTube of Tim and a high school friend playing in “Wicked”.