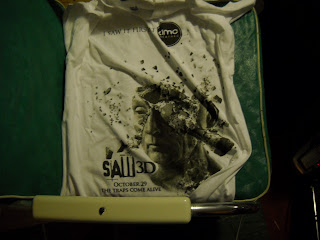 Well, Lionsgate is hinting that “Saw 3D: The Final Chapter”, or "Saw 7", is "Chapter the Last"; thankfully; what started out as a great exercise in low-budget creativity turned into a franchise that feeds on itself, where storytelling ideas become exercises in manipulation. Yup, the 3D is technically effective on the body parts, but this “gore fest” movie seems like a remake of the notorious “Pieces” (It’s exactly what you think it is. )

The story, reaching for ideas, supposes that a self-help guru among the survivors, Bobby (Sean Patrick Flannery) continues the mayhem, and this time the story is also recursive. (You’ll see.) That seems more like a trick than genuine plotting. The opening of the film seems like a recreation of ABC’s “What would you do?” Not much, it seems. Bobby likes to talk about his pecs and they’re getting damaged; thankfully, his chest is already completely hairless. Immaturity sells in Hollywood.

The lesson from all this is, maybe, for movie entrepreneurs, horror is just plain fun. (Look at “Blair Witch” and even “The Last Broadcast”.) But big business, even from “medium sized” studios like Lionsgate, can ruin the party.

AMC is giving away T-shirts with the 3D tickets. On a Sunday Halloween night at Arlington VA’s Courthouse, the crowd was sparse.