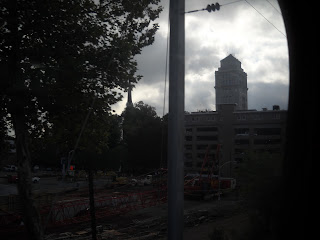 “John Rabe” is a controversial historical film about unlikely or ironic political bedfellows. In 1937 in Nanking, China, the Japanese attacked civilians in what would become known as the “Rape of Nanking.” A German businessman John Rabe (Ulrich Tukur) teamed up (after considerable hesitation on both sides) used Nazi Party connections and teamed up with American physician Robert Wilson (Steve Buscemi) to form a safety zone to save over 200000 Chinese civilians.

Only gradually in the film does Rabe have to come to terms with the significance of Nazi ideology and Hitler’s plans, as one companion, related to Beethoven, talks about discrimination because of his partially Jewish background.

The film, in 2.35:1, is striking in the big scale attack scenes and has much black and white footage from 1937 of the original siege.

The film cost $20 million to make, and is distributed in the US by Strand Releasing, generally known for its LGBT films, but it also distributes other films likely to have an “unpopular” social or political context. The DVD also shows the 20th Century Fox banner, which distributes the DVD in Germany. The production companies (several) are from Germany but the film was made largely on location in China.

Strand's link for the film is here.