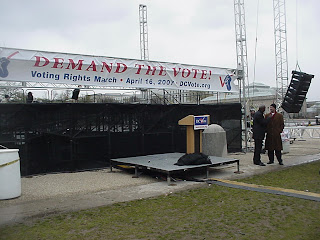 At a time when Washington DC faces a steeper struggle for voting rights after GOP victories, I rented HBO’s long film “Iron Jawed Angels” (directed by Katja von Garnier) about the bitter battles for women’s suffrage that was fought simultaneously as the country anticipated and got into World War I. The title of the film is a metaphor for something that happens late in the film, as jaws are forced open.

President Woodrow Wilson (Bob Gunton) did not appreciate the effort (remember he had people who challenged or criticized the war draft for sedition). The women (Hilary Swank, Margo Martindale, Anjelica Huston, Frances O’Connor) came to understand the hypocrisy of the “Democratic Party” in power of the time.

But the women also engage in moral and even existential debates. When they demonstrate, they are arrested and charged with “obstructing traffic” and refuse to pay the fines, and go to jail, where they protest bed-down orders and go on hunger strikes, being force-fed.

There’s a great quote “she’s not a radical, she’s a Quaker.”  Very early, an African American woman expresses concern that everything will be done to keep her from voting even if "white women" win the right. It was for a long time (poll taxes, etc).

The jailhouse interview with Alice Paul (Hilary Swank) seems like a clash of belief systems. The psychiatrist believes one cannot challenge established authority that holds society together, and says she is willing to starve to death to further her cause (Patrick Henry’s quote) but that she is not mentally ill. She will be force-fed to break the movement, liquid scrambled eggs, through a stomach tube. Eventually 30 women are on the hunger strike. Yet at one point the women are compared to “draft dodgers.” That hardly makes sense, when these women were ready for sacrifice; they were not kibitzing dilletantes.

Wilson eventually changes his mind, and sees that women's suffrage would help with the War.
The following video on women’s rights was a high school AP project.