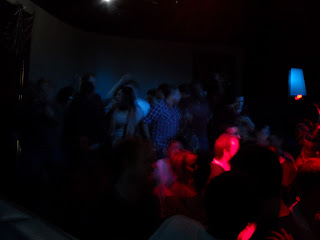 The little biography of gay poet Allen Ginsberg, directed by Rob Epstein and Jeffrey Friedman, is “Howl”, based on the booklet “epic poem” from about 1957, which became the subject of an obscenity trial in San Francisco. James Franco is likeable as Ginsberg (pretty robust, as he will be in “127 Hours”), and David Strathairn plays the millstone prosecutor.

The film uses about four narrative techniques. The core of the film is the “courtroom drama”. But Franco also talks ad lib, and animation illustrates his poetry, and black-and-white footage shows him with various male partners.

The trial has “experts” (college professors) testifying on valid literature, and yet the definition of “obscenity” was based on how it affects the “average person”. Literature must create its own form, one witness said. ("Howl" made a derivative form from Walt Whitman's "Leaves of Grass", which we all do read in high school.) There was discussion about the “bad words” and whether the poet needed to use euphemisms. But it’s clear that the main issue was that the poetry was about homosexual experience. In fact, in one of his monologues, Ginsberg simply states “I am a homosexual”.

Ginsberg also talks about the psychiatric “treatment” and “reparative therapy” of the 1950s, including shock treatments, which he got out of by promising to be straight.

The official site from Oscilloscope Laboratories.
The film is showing at the West End Cinema in Washington DC.