Franco plays a flawed superman in "127 Hours": it's agonizing to watch 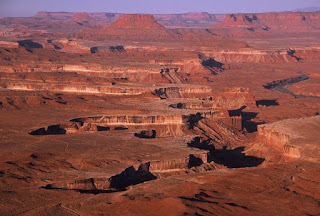 When I went to see “Unstoppable” (“disaster movies” blog, Nov. 13), a family sitting behind me said it did not relish watching an appealing man have to cut his own arm off. So that is the subject matter of Danny Boyle’s new adventure drama for Fox Searchlight, “127 Hours”, with James Franco playing mountaineer Aron Ralston, who became trapped in the narrow Blue John Canyon by a boulder in April 2003.
The film appears to be shot in digital video, in regular aspect ratio (in order to have close-ups on Franco), despite the breathtaking aerial scenery of Canyonlands, which shows Ralston’s Canyon as a narrow line in the red rocky plateau.  The film really stresses the Martian look of the place, almost as if Ralston were lost on another planet.
In fact, the trailers give one the impression that most of the movie will be about the rest of Ralston’s autobiography (“Between a Rock and a Hard Place”) and not make us agonize for the 5 day ordeal. Indeed, there’s an opening sequence where he gets some co-eds to skinny dip in a cave lake, and it’s taking a “short cut” that will get him into trouble.
In fact, his accident happens about twenty minutes into the film. But what makes the film work, to a point, is that Ralson, as played by Franco (with the same individual touch he gave Ginsberg in “Howl”) is such a great person. He is rather like Clark Kent without powers.  Franco had to be good with all the knots and gear to play the part so well. Very few men could have survived this at all, although very few would have played daredevil enough to get into the situation to begin with. Ralston obviously would have been capable of serving in Army Special Forces, Navy Seals, or similar military rescue units.  (He could still teach the skills, even with a prosthesis; I wonder if he has worked in training military in mountaineering.) Yup, in a country consumed with obesity and physical inactivity, he makes a great role model.
Boyle creates some backstory in the film with flashbacks from the canyon. The cloudburst sequence may have saved Ralston’s life, as it gave him a lot more water (almost drowning him). In a way, Boyle faces the same storytelling issues as did Robert Zemeckis ten years ago with “Cast Away” (with “everyman” Tom Hanks), also from Fox (and Dreamworks).  Remember “Wilson”?  There’s nothing wrong with talking to yourself.
The site for the Boyle film is here.  The film was produced by Pathe and Everest Entertainment.
Wikipedia attribution link for Canyonlands National Park, Utah picture
Posted by Bill Boushka at 2:52 PM