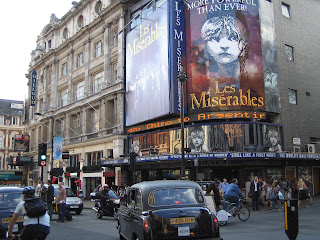 It may sound disrespectful to make a “farce” (it not a full satire) about the mentality of jihadists in Britain, but that’s what makes the little film “Four Lions”, from Film 4, Draft House and Optimum Releasing, playing at Washington’s West End Cinema, directed by Christopher Morris.

The four guys (Benedict Cumberbatch, Kayvan Novak, Riz Ahmed, Nigel Lindsay) tease one another and plot in a Midlands city with a great view (maybe Birmingham). There’s an emptiheadedness and nihilism in all of them, as they make their plans to go up in smoke in order to fit in to the “gang”. In time, one by one, all of them do (leaving few “pieces”), as the British police (not bobbies, but well-armed tactical squads) close in, particularly to protect the London Marathon. I think I stayed on the street shown in the climax of the film when I visited London in May 2001; the restaurant looks familiar.

The post climax (at the credits), going inside a US hangar, and then an Egyptian sarcophagus, is just plain weird, put fitting.

I trust that the “real raven” shown in the poster of the film was not harmed.

I guess these "men" really needed women to tame them. There's a curious early scene at a panel discussion of moderation within Islam.