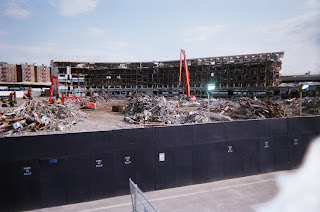 Well, I don’t think anybody will confuse Alex Gibney’s “Client 9: The Rise and Fall of Eliot Spitzer” with the sci-fi “District 9” although after his fall, New York State Democratic governor Spitzer (and former attorney general) may have felt like one of the latter film’s prawns.

The film is pretty blunt as to its point: Spitzer had been hot on the trail of all of Wall Street’s ponzi schemes, so, six months before the Crash of 2008, “they” decided to take him out. To make it legal, the fibbies had to put somebody in jail, so the gal who helped run the Emperor’s Club got six months. A libertarian would wonder why this wasn’t left as Spitzer’s own business.

This film is not as visual as “Inside Job” even though it deals with some of the same stuff. It males a Monopoly board look interesting. A lot of the film consists of Spitzer himself talking, and “taking responsibility.” There is a Freudian point made when witnesses claim that Spitzer wore calf-length stockings to his trysts (we’ve already seen him in shorts playing tennis). Spitzer is 51 now. (The film also documents that the call ring allows customers to specify depilation preferences over the Internet.)