"Dark Mirror" mixes up Oscar Wilde with the haunted house story ("What lies beneath?") 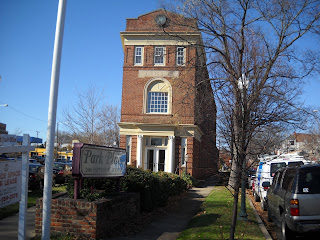 The idea of a picture or mirror taking us through a portal to an alternate reality (or “Dominion”) has always intrigued many writers, but in the 2007 IFC film by Pablo Proenza, “Dark Mirror”, it leads us into a typical haunted house maze without a particularly satisfying concept.

Lisa Vidal plays photographer Deborah Martin, who, when house hunting near the Cascades with husband Jim (David Chisum), says “I’ll take it” to a realtor when she notices a curious mirror in the house. Funny games happen when she takes pictures of it, and she starts losing it, including her job. (Eventually it doesn’t bode well for her own husband.) But she’s being stalked by a neighbor and stranger, and pretty soon an old diary (not a blog) shows that something bad happened with a couple that lived there before. The mirror is said to have the ability to trap spirits between the layers of glass.

This sort of story works better, maybe, in docudrama fashion (that’s why movies like “Paranormal” and “The Last Broadcast” work so well).

As the movie built on the “subplot” involving the paintings and drawings, I thought of Oscar Wilde’s novel “The Picture of Dorian Gray”, which I actually read for a book report as a senior in high school (the male English teacher didn’t mind the subject matter). There are many film versions, but I’ve seen on the 1945 MGM “glorious black and white” one by Albert Lewin with Hurd Hatfield.

But the wandering nature of this movie reminded also of the 2000 thriller “What Lies Beneath” (Dreamworks, Robert Zemeckis), where there are a lot of dead ends and false leads.

For ninth grade French class, I wrote a story (in French) where someone goes into “La vielle maison” (“The Old House”) and enters an alternate reality that takes him to Mars. It’s around somewhere in handwritten copy. I wonder if it would make a film.