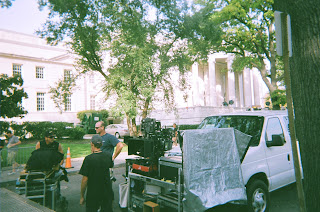 Strand Releasing has a new film-DVD in its famous BL series, “Boys Life 7”, which is named after the famous magazine of the 1950s, but has become a famous LGBT film franchise of its own.
The latest installment has four films, all selected from the 2010 Sundance Film Festival, all having some sort of rewards.

“The Young & Evil” (15 min), directed by Julian Breece, is perhaps the most “issue-oriented” in the set. Specifically, Breece is examining the whys of the high rate of HIV infection in the African American gay male community, compared, he says, even to whites. A teen, Karel (Vaughn Lowery) visits a health counselor but then seeks a “submissive” relationship with an older man Naaman (Mark Berry), with all caution thrown to the wind.

“Spokane” (29 min), directed by Larry Kennar, is the longest of the set but for me not so remarkable. The name comes from the “other” city in Washington state, in the eastern “inland empire.” A straight man meets an openly gay man at a wedding party; they get to talking, and then have an energetic tryst in a motel. The dialogue progresses in such a way that the “orientations” pretty much merge. Much of the film is very darkly lit, making the action less inviting to watch.

“First Date” (20 min), directed by Gary Huggins, may be the most shocking of the set. The film opens with an Internet chat of the kind that Chris Hansen and NBC’s Dateline made a notorious series about. The perpetrator (Santiago Vasquez) is an ex-con who somehow works as an undercover informant. But he goes over the line with the teen date (Tian Wei), resorting to violence when he wants to, but still willing to react to an accident as a cop, apparently his earlier life that went down. I still think that this whole subject deserves to be explored in documentary film. It’s not funny. Huggins says that he hired non-actors whom he had met at an inner city public library.

“Raw Love” (“Amor crudo”, 16 min, Martin Deus, Argentina, in Spanish with subtitles). Two friends face separation after graduation from high school. I remember my own experience with this situation in the summer of 1961, although my own behavior had to be much more restrained.

Sorry, there's nothing in this set that rises to the accomplishment of "Bugcrush" in BL6 (review Jan 29, 2008)

My original embed here disappeared, so here is one of Strand's own promotional videos.

Picture: from a shoot of “Transformers III” in Washington DC Columbus Day.

(A review copy was provided to me by the distributor.)
Posted by Bill Boushka at 1:57 PM