"Rivers Wash Over Me": race relations and sexuality interplay in modern Alabama 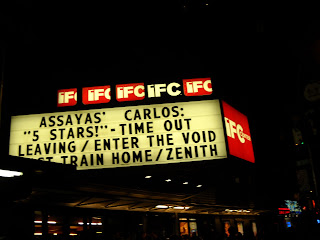 John G. Young worked almost a decade on his new film “Rivers Wash Over Me”, the title of which surely reminds one of “The River Runs Through It”, but this is a totally different, and open-ended experience.

The title probably refers to a scene near the end, where white gay teen Jake Anderson (Aidan Schultz-Meyer) teaches African-American teen protagonist Sequan Greene (Derrick L. Middleton) to float, with the effect of a baptism as much as an expression of love.  There has been some literature lately that African American children don't learn to swim.  I had difficulty learning in the 1950s, although I somehow managed to pass a college PE course in it with a C (no, I didn't have to do water survival like most courses).

Sequan has come to the hills of northeastern Alabama (which I visited last in 1989) after his mother died in New York, to live with relatives. But the family is troubled; Sequan’s cousin Michael (Cameron Mitchell Mason) covers his own insecurity over race and sexuality by bullying the sensitive Sequan, often with very bad words and physically, too. Sequan befriends a “bad girl” Lori (Elizabeth Dennis). Ironically, Jake, her 15-year-old brother, is the most grown up and stable character in the film (which gives some meaning to otherwise disturbing subtetxts about minors, for example).

The plot elements seem a bit random, but so they would be in real life. The film progresses slowly and episodically almost as if it were a Robert Altman film; just as Jake's character provides some sunlight, the plot seems to head toward violence and tragedy. Will the movie end in a minor key after all?

There’s an English teacher (a middle aged white male) who makes a lot of “12 grade English” with multiple choice quizzes, moving on, however, to a comparative essay for a final exam – hooking in to Sequan’s talents as a budding writer. He likes William Faulkner’s “Absalom” (a very provocative Old Testament character; see my drama blog in Aug. 9, 2009) and carries around a copy of James Baldwin’s “Nobody Knows My Name”; the movie also mentions Goldman’s “Lord of the Flies”, which everybody reads in high school (usually before senior year in high school). In my own senior English, we surveyed Shakespeare (“Macbeth”) and English literature. “It’s a better literature” our own Mr. Gibbs always said.

The film was shot in the Catskill foothills north of New York, but the summer countryside resembles northern Alabama more than one would expect.

The film will be distributed by Strand Releasing, and won best feature film at the Chicago LGBT film festival. To get distribution, you have to get into the festivals and win prizes. When you go to a film festival and vote on a film, people really count the votes.

I couldn’t get the film’s site to come up, but here is the Facebook page.


(A review copy was provided to me by the distributor.)
Posted by Bill Boushka at 7:33 PM