"Out of Annapolis": gay alumni of the Naval Academy tell their stories as "don't ask don't tell" approaches its well earned demise 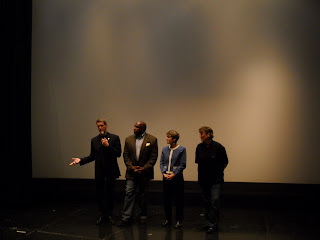 The second half of the Reel Affirmations “don’t ask don’t tell” doubleheader Oct. 22 was “Out of Annapolis”, a 71-minute documentary about gay and lesbian graduates of the Naval Academy. The website is here.

The film is directed by Steve Clark Hall (one of the earlier Alumini) and contains soundtrack songs by Heather Davies (another one), and from production company Q-Boat. Other alumni include Jose Soto, Franklin McNeil, Lou Adissi, Mike O’Donnell, and Brian Bender. There are eleven in all, and most of the film consists of speaking segments with photos and video clips, of even of events at the White House, throwing hats at graduation, and climbing a monument at the end of Plebe year. There are lots of shots of duty stations, for example inside submarines. Gay and lesbian alumni tended to choose duty specialties (including the Marine Corps as well as submarine life) in the same ratios as everyone else. Until recently, only men could serve on submarines. 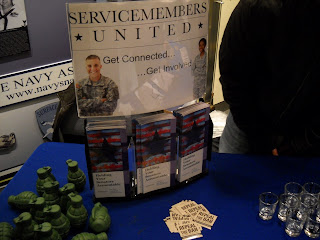 Most of the narratives dealt with the terrible burdens of keeping gay private lives secret. According to servicemembers, before the 1993 law (and 1994 official Pentagon Policy), “don’t ask don’t tell” made things slightly easier for many, inasmuch there were some areas that the military wasn’t supposed to investigate (such as visits to gay bars). Prior to 1993, the NIS would visit the parking lots of gay bars (particularly near Paris Island, SC) for base stickers. At least one of the protagonists in the 1993 debate, Tracy Thorne, appears in an image in the film.

Most of the graduates left the Navy “quietly” after finishing initial obligations, out of fear of discovery. A few, however, were nabbed by witchhunts and discharged.

As I recall, director Hall was the officer who pretended to live as a "straight man in the Castro" when stationed in San Francsico.

The Service Academy Alumni (SAGALA) have a website here.  It was interviewed on Scott Peck’s 1993 Sunday night radio show and some of the female members said on the show that coming out would actually be good for unit cohesion.

Hall and three other of the alumni were present for a Q&A. Toward the end of the Q&A, there was mention of the Internet and Facebook and their effect and help pushing the end of "don't ask don't tell". There was also some discussion of circumstances at West Point (Army) and Colorado Springs (Air Force).

There was a wine and cheese reception at the Navy Memorial Museum between the two films.