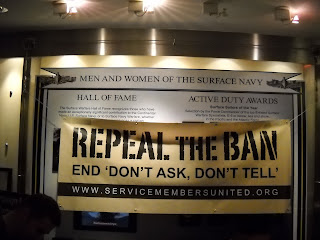 Ned Farr’s “A Marine Story”, the first and principle film of a double feature at the US Navy Memorial tonight (Oct 22) on “don’t ask don’t tell”, is the first film to my knowledge to build a complex fictitious story around the policy.

Alexandra (Dreya Weber) has returned home to the inland California (maybe the Owens Valley) area after being discharged or resigning from her commission in the Marine Corps, and she takes on the challenge to whip up a young woman (Paris P. Pickard), charged with meth possession, into shape to join the military or face jail. (That’s not done very often.) She stirs things up in the local town, beating men at arm wrestling. The film tells her back story, of how an “investigation” of her lesbianism started with an email sent to her military computer. Her commander (Jeff Sugarman) tries to be sympathetic, and even says he personally doesn’t care and that he understands that if gays can serve openly in the military, politicians can’t deny them other equal rights like marriage. But then some photos show up from vengeful men. The story accelerates (and becomes a bit opaque) toward the end as she takes on the drug ring, and winds up as a sheriff, with her protégée successfully in the Marines.

The film supposes tha Congress finally repeals "don't ask don't tell" and that President Obama signs the repeal. That part of the film is definitely fiction (as is the whole story), although maybe not for long. 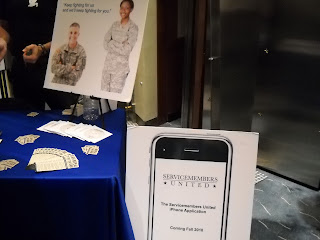 The film (from LightRON) is big , in digital anamorphic HD Panavision, professionally made, and ought to attract a major indie distributor before long. (Or will it be Frameline?)