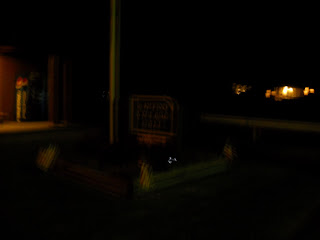 “Light Gradient” (“Ruckenwind”) is a small gay “horror” (of sorts) film from Germany, stretched to feature length (75 minutes), although it could have been a short. Directed and written by Jan Kruger, it is a little bit in the tradition of “Bugcrush” but even more elusive. It’s thriller, mystery, horror, art, and eroticism, all of these things – and minimalist to boot.

The film focuses on two young men, apparently lovers, and a mother and a teenage son at a farmhouse. As so often in these sorts of films, the teenager (maybe 14) is the most mature and psychologically intact of the lot, and oddly the most immune to harm. He could never be abused, so the posters for the film may throw us off a bit.

The film opens as Johann (Sebastian Schlect) reads a story about the fox and the hare, and he seems to be in a mental institution or jail, about to be interviewed. The rest of the film is then backstory, as we see Johann and another young man Robin (Eric Golub) on a train, then going on a hike to develop a relationship. They lose their bikes (misterioso), and then they ambush an older couple for food, letting you know that someone is not completely stable (but it happens so fast you’re not sure). They arrive at the farmhouse. After the teen first defends the home at gunpoint, the mother arrives and they “family” takes them in with almost Christian hospitality. The teen Henri (Denis Alevi) accepts their homosexuality but seems curiously aloof, almost as if he were observing an experiment. Eventually, we begin to see that the Johann and Robin have their own agendas, leading to the film’s sudden conclusion.

The title of the film appears early, as the boys read a topographical map. The film has rather sparse dialogue (the subtitles would be unnecessary, as the German sounds almost like the English derived from it), and the camera tends to move between the farm scenes, often along trails of varying lighting (almost like in a film school exercise), to scenes of intimacy that sometimes are really “interesting” (involving the men only); there is some focus on “exploring” male chest and legs. Then, the script ventures into literature, old books lying around, providing backstories to anticipate what will really happen here.

Like Carter Smith’s notorious short, this is one of those films where DVD owners or renters will want to watch some scenes repeatedly to find all the little clues. This is film for its own sake, telling stories in images with few words.

The film has won awards at several LGBT film festivals, including Outfest, Frameline, Torino, and Miami. It would be interesting to see how it would do in the more “established” international circuit (San Sebastian comes to mind – a city I have visited with its famous beach – and I hope to visit a festival there some day). I think it’s interesting to try to merge gay “culture” into the mainstream.

One might compare this movie to Lars van Trier’s “AntiChrist” (reviewed here Oct. 26, 2009). And the camera style here did seem to follow many of the concepts of Dogme.

Picture (mine): October night in Kipton, Ohio (near Oberlin), a historic town that would make a great background for low budget mystery and horror movies (and that part of the country needs an economic boost!)

(A review copy was provided to me by the distributor.)
Posted by Bill Boushka at 7:20 PM