"Inside Job": with Matt Damon narrating, is the slickest account of the Collapse of 2008 yet 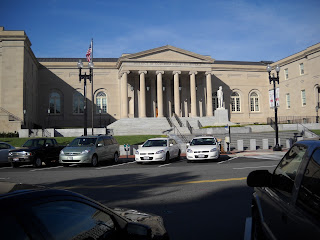 In 1964, in my college years (not my best), I received a quarter in the mail with an invitation to participate in a chain letter. It claimed I could earn $64 for the investment of a quarter. I did it, and got back just two quarters. I was naïve at the time.

The new documentary (from Sony Pictures Classics, effectively Columbia Pictures), directed by Charles Ferguson and narrated by Matt Damon (having a big October weekend) is “Inside Job” and it gives us a slick rendition of the way Wall Street ran wild after deregulation and gave us the Financial Crisis of 2008. It looks big, photographed in full 2.35:1 with many aerial shots of big cities (Singapore as well as New York), and it actually starts out with landscapes of Iceland, when the country was healthy.

We have heard the history of derivatives and credit default swaps, but the most remarkable aspect of these instruments was the inherent conflict of interest: they encouraged investors to bet against their own clients, or buy insurance in other people’s property and bet against it (violating the cardinal “insurable interest” rule).

Later, financial institutions were buying off the three major investors’ rating agencies. Amazingly, lawyers tried to argue that these agencies had a “First Amendment” right to express their “opinions”, an idea that could not possibly hold legally in the face of conflict of interest. But later, the financial institutions bought off academia, paying professors to publish economic analysis that favored their deregulation. The “conflict of interest” has been a major topic on my main “BillBoushka” blog, and the only way this obviously illegal arrangement held together was a culture of collusion and looking the other way. The same arguments could have serious implications for unsupervised Internet speech and employer blogging policies, as I have covered.

The film makes an effective companion piece to “Wall Street II” a few weeks ago.