Gregory Smith plays sheltered nerd as a juror in "Manson, My Name Is Evil" 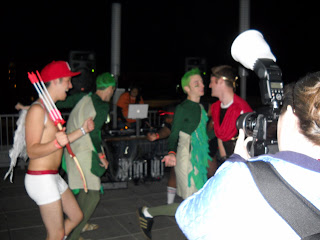 Gregory Smith plays another curious role in the Nixon-era satire “Manson, My Name Is Evil”, directed by Reginald Harkema. Here, he has taken a job as a chemist and is sheltered from the Vietnam era draft, naïve about the role of the manufacture of herbicides. And he has fallen in love with a hippy girl (Leslie/Kristin Hager) who is connected to the Manson ring. After the Manson “incident” he is called for jury duty, and she is a defendant. Of course, he should have been struck, but then there would be no movie. He has to be sequestered.

The script makes some interest points about the values and cultural conflicts of the Vietnam period. Perry (Greg’s character) and his girl friend have a naïve idea about Christianity. Later Perry’s father chastises him for taking a draft deferment and walking out on a “patriotic duty” and says that even God had to sacrifice his only Son. But in earlier eras, people did “owe” the country service and sacrificial exposure. Today’s Internet generation has forgotten that this is how it used to be.

Later the prosecutor says “These defendants are not human beings; they are mindless robots.” I’m not sure this is what we normally expect from “courtroom drama”.

The film was produced by New Real Films (Canada) and is now distributed by Lionsgate. The official site is here.
At the very end, Perry doesn’t get out of things. He balances his karma. During the closing credits, we hear Richard Nixon’s “silent majority” speech. North Vietnam cannot defeat us, he says; only Americans can do that.