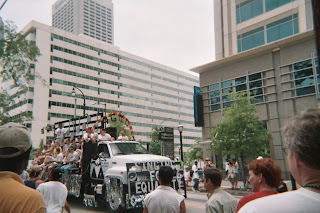 Greg Berlanti has, with me at least, a reputation for dramatizing intense and unusual family situations, often initiated by tragedy. This was best shown in the WB series “Everwood”, which starts with a surgeon’s moving his son and daughter to Colorado after loving his wife to a car accident, and later builds on another accident caused by a neighbor’s son.

In the WB-Village Roadshow film “Life as We Know It” that he directs (Ian Deitchman and Kristin Rusk Robinson screenwrite), we see a theme pretty popular in Hollywood comedies, but not often discussed by political policy makers. Again, single, childless people wind up raising other people’s children, pretty much by coercion. That would please the “natural family” crowd like Carlson, Mero, and Longman. The idea has been visited before in movies like “Raising Helen” and “Saving Sarah Cain” and another WB series from Spelling, “Summerland”.

Specifically, Atlanta bakery shop owner Holly Berenson (Katherine Heigl) and sports TV producer Eric Messer (Josh Duhamel) had once been “makematched” by friends with a baby daughter Sofie. The blind date didn’t work (I’ve never seen one fail before they leave the house). But after an auto accident kills the friends while the baby is being sat, Holly and Eric, godparents after the wedding, find they are named as preferred guardians of the baby in the will, in which a mortgage-free house is offered (Berlanti’s situations get set up with people fortunate enough to have money). The “obvious” question is, will they become attracted to one another (or “learn to love”) and want to marry some day?

I’d sort of like to see Berlanti tackle an “Everwood 2” film, and show us what happens to pianist Ephram, and whether the new character Kyle makes it to Julliard.