"The Girl Who Kicked the Hornet's Nest": 3rd Film in Swedish Millennium Series from Yellow Bird 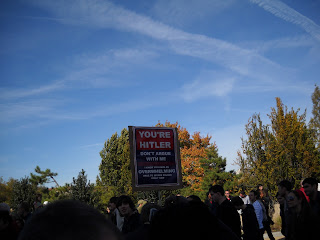 The final film from Music Box and Yellow Bird ("we turn bestsellers into blockbusters") in the Millennium “Lisbeth” trilogy, “The Gril Who Kicked the Hornet’s Nest” (“Luftslottet som sprangdes”) opened this weekend, and I saw it in a 2/3 full large auditorium at the AMC Shirlington in Arlington Oct. 30.

It’s directed by Daniel Alfredson (as was the second film) and is in the normal “1.85:1” aspect ratio rather than full wide screen (as was the first film by a different director). I think these films benefit from the widest possible screen, even Imax. But they’re little indie films, right?

Unlike, say, the James Bond franchise, or even Harry Potter (the last of which will be released in a Parts 1 and 2), the three films really are parts of the same story (based on Stieg Larsson’s novel trilogy), so the bookends of the films have to match up. That gets interesting, as the third film shows a few flashbacks to the second. That’s not always easy in writing film franchises, as subsequent films can be limited by what happened in earlier entries. It makes a franchise more like a TV miniseries. The second and third films seem more interconnected than the first.

Here, there is some pretense of courtroom drama at the end, although it is low key, but Lisbeth *Noomi Rapace) defends herself by forcing prosecutors to ask questions very precisely, almost like someone with Asperger’s. But the trial subsumes the entire backstory, or a cabal within the Swedish government covering up connections to the former KGB and now the Russian mafia. It gets hard to believe that a modern, liberal, almost socialist democracy like Sweden would ever let this happen.

The publishing magnate Mikael (Michael Nyqvist) gets the real “life lessons” about social protectionism when he has to face being framed for drug trafficking and probably child pornography possession, as a result of his helping Lisbeth.

The early scenes show Lisbeth recovering nicely from her gunshot wounds in the hospital, where the young physician (Aksel Morisse), who also protects her, makes quite a striking impression. Scandanavians don’t all fit the same stereotype.