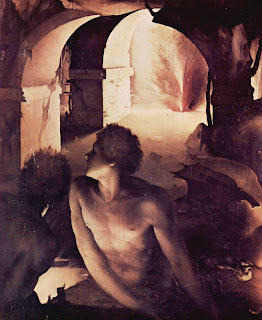 Once again, Clint Eastwood gives us a studied, introspective film, “Hereafter”, from Warner Brothers and Speilberg’s Amblin Entertainment. The issue is “life after death”, but what’s interesting is how, as in the film “Babel”, three very separate lives around the world slowly come together.

Also what’s interesting is a moral point, that our “karma”, and perhaps connections from the beyond, can draw us into externally caused catastrophes, and also save us from them.

The two incidents are rather like manual bookends for this 2 hour-plus film. The opening sequence, where a French journalist (Marie / Cecile de France) almost drowns in the 2004 tsunami (apparently Sri Lanka, although the credits say this sequences was filmed in Hawaii), and the 2005 London underground bombing (Al Qaeda), where a little boy, Marcus (Frankie McLaren) escaped because of the intervention of his deceased twin brother (Jason / George McClaren). These scenes are quite compellingly filmed, making the moviegoer experience “what it would be like”. (The withdrawal of the undertow as a predictor of the tsunami is particularly effective; then everyone is shocked that a twenty foot wave can cause so much destruction.) Furthermore, Jason lost his life on London streets when running from bullies (a timely topic after this film was made) into the path of a SUV.

The central character, George Lonegan, is played by a stout Matt Damon. He has an unwanted “gift” of seeing people’s deceased loved ones (on touch), which he says he acquired after an unusual childhood spinal infection (a kind of meningitis) and unusual surgery. But to get away from what he experiences as a curse, he pays his dues by working as a manual laborer on the San Francisco docks (as a longshoreman), when he gets laid off. He complains that the company (or perhaps union) has favored married men with families in the layoff process, an interesting injection into the film from writer Peter Morgan. He’s also taking a cooking class (quite interesting to watch; some of the shots remind me of the ”yfrog” tweets of NYC classical composer/cook Timo Andres) where he meets a young woman who wants to challenge his gifts. Then, after the layoff, an old buddy tries to get him set up again as a medium.

In the meantime, Marie takes liberty with her job, where she is supposed to write a “Bob Woodward” style book about Mitterand, to write instead a book about mediums. Publishers jump at the work, and pretty soon she is on book signing parties that draw bout George and Marcus.

Whenever George touches a subject, the film shows his “afterlike” visions, which are fuzzy and not all that original. (They’re nothing like those in the Robin Williams 90s film “What Dreams May Come” or the earlier “Defending Your Life”). I thought here in writing a review I would share some of my own dreams on this. Typically I find I have been (in the dream, there is no element of choice) taken (or “abducted”) to a barracks-like structure in a forest, with plants of unusual colors, almost black (hint, another planet, around an M-star). Inside, I go around and look for a room to claim; there are bedrolls and nothing else. Sometimes there upper stories. In one case, there was a bar that appears. But later, I wind up in an apartment building in a city resembling Minneapolis, with more corridors and elevators that the real one, and some features of other dormitories and apartments I have lived in. There are computers, separate terminals for connection to the Earth’s Internet , and to the new planet’s (even it has Facebook). Sometimes there is a planned community, low rise buildings with people living communally, having few or no individual possessions. The land around is in a kind of perpetual twilight (hint: the planet keeps one side toward its sun), and relatively flat, with few mountains; lots of waterways, and mild temperatures like those around San Francisco. Am I seeing a vision of “heaven” or of the nearest people-inhabited planet (Gliese 581 G)? It seems possible to start a new, self-driven (rather than “purpose-driven”) life there. But have I made a bad choice? No, none of this is about making and following up on choices.

Warner Brothers has a site here. I don't know why AMC Theaters marks this film as "Independent"; it looks like it had the full support of WB during production.

The original music is by Clint Eastwood; he adapts the orchestral melody (without piano) from the E Major slow movement of Rachmaninoff’s Second Piano Concerto with some effect; he also uses several excerpts from opera, including Carmen and Turandot. (Sorry, no atonality or even polytonality.)

Wikipedia attribution link for picture of Inferno ; rather curious view of a possible afterlife (not good; looks too much like the barracks in my dreams; the chest isn't bad, though ).
Posted by Bill Boushka at 2:34 PM