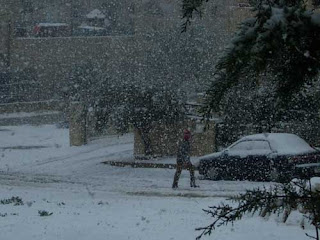 It’s interesting that a drama about mentoring would come from the Islamic world, but such ias “Captain Abu Raed”, directed from Matalqa, from Neo Classics Films (and Gigapix and Paper and Pen Films). Nadim Sawalha plays the aging janitor with a bookish inclination but a lack of opportunity in modern day Amman, Jordan (“Hashemite Kingdom of Jordan”). One day a boy Tareq (Udey Al-Qiddissi) mistakes him for an airline pilot. Abu begins to weave stories of world wide travel to inspire the boys. Gradually, he comes involved with the boy’s family, which is not always kindly. We see a strict father willing to burn a hand to install discipline, and parents concerned about daughters who might grow up to remain spinsters.

The director focused the action around the Citadel, Roman ruins on a plateau overlooking the city, often giving the film ($2 million budget) spectacular views. The director actually went into the refugee camps and role-played with kids to find his cast.

The music score was composed by Austin Wintory. The DVD has a short on scoring the film, with a “scoring captain” in Austin’s studio.

The producer explained the process of selling the idea of making film in Jordan to sell to the world.

Here is Neo Classics's site with videos. Neo Classics has a flashy musical ritornel and animation for trademark, but I haven't found it on YouTube yet.