"The Town": Affleck's second effort as a director, looks big; Charlestown has no "godfather" 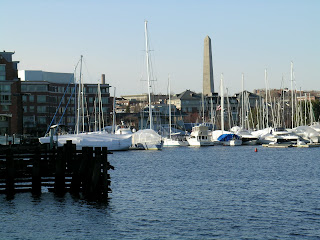 In May 2002 I visited with actor Mark Parrish (“Mustang Sally”) in a Legal Seafoods in Prudential Center in downtown Boston. I remember catching him on a cell phone as he drove around the Dig getting there. On the way back, I took a street-smart tour of Boston, and believe I drove down through Charlestown, some of the same alleys as in the new movie directed and partly written by Ben Affleck, “The Town”.

The film (from Warner Brothers and Legendary Pictures), based on the novel “Prince of Thieves” by Chuck Hogan, deals with the “Irish Catholic Mafia”, where bank robbery is the main source of income passed down crime families. Ben Affleck himself plays long time thief Doug MacRay, abandoned by his mother in childhood, now just starting to develop a moral sense and desire to leave the “profession”. He develops a relationship with a female bank manager whom he had kidnapped, Claire (Rebecca Hall), while FBI Agent Adam (Jon Hamm) is hot on the trail of both of them.

The film shows some incredible car chases and shootouts, in the streets and later at Fenway Park (the famous Lansdowne Street, landing spot for homers over the Green Monster, included). The various disguises of the robbers are effective.

It’s interesting that Affleck, whom we think of as a somewhat intellectual person as well as physical, wanted to work on this material and develop it into a film, which some people will see as “The Departed II”, and which others will compare to the Australian “Square” movies or even the Swedish “Dragon Girl” thrillers. Could the movie have made room for a character like Lizbeth?

The script does, at a couple of points, go into how individual citizens not part of the crime families can be targeted and silenced, a very disturbing point. Visitors may want to check out the Lifetime film “Family in Hiding” (2006, Lifetime / Insight, dir. Timothy Bond) with Brenda Strong who is put in witness protection with her kids after witnessing a parking garage hit on a Los Angeles district attorney. In an age of Facebook, some people get forced into keeping low profiles.

Warner Brothers site for the film is here. Even though it is a major studio release, it was in several film festivals.

AP has a YouTube video of an interview with Ben Affleck (“Benjamin Geza Affleck”, 38), where he talks about this as a character-driven story, and also a story about how we are shaped by our environment. This is his fourth film in Boston.