"The Tillman Story": a former pro-football player's "fratricidal" death in Afghanistan and the coverup 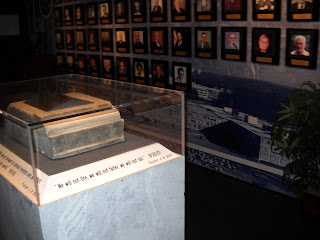 Amir Bar-Lev’s film “The Tillman Story” (don’t confuse with “Truman Show”) , from the Weinstein Company, has a lot of visual impact similar to “Restrepo”: a lot of live footage of the war in Afghanistan, this a little earlier in 2004, and even a little of Iraq. In fact, it’s incredible that some of this footage exists.

But, of course, it is a moral and political movie. A pro football player, Pat Tillman, decided the day after 9/11 that he would serve his country, leaving a multi-million contract with the Arizona Cardinals, along with his younger brother Kevin, who might have become a major league baseball star. They enlisted in June 2002 (he was 26), and they moved into Ranger training. He would only rise to the E4 rank, but he would be involved in the Jessica Lynch rescue before going to Afghanistan. One day in April 2004, his platoon was divided into two “serials”, and he would get shot by friendly fire when emerging from a canyon.

The Army at once tried to cover up the incident, with one soldier told not to tell his brother anything on a cargo plane flight. After a few weeks, the family learned about the coverup from a reporter, and then battle for get the facts began. In time, the lawyer father Patrick Sr. secured a 3000-page briefing document, with many details “redacted”. Eventually, the Army IG investigated and blamed one retired general for the coverup. Patrick Sr. and Mary Tillman persisted, and eventually secured congressional hearings. All the evidence suggests that the coverup went to the very top, to McChrystal, and then to George W.   The administration really had thought for the first few days that it could turn Tillman's "heroism" into a political tool to support the war.

The film does show the unit cohesion among the Rangers, the close physical contact and the gung-ho attitude. Tillman is depicted as politically ambivalent, having read Noam Chomsky, and actually had been an academic star in college. An Army officer makes a snide remark about his supposed agnosticism or non-belief, as if he would go nowhere as a result, and was somehow more pliable, if special.

The Weinstein Company’s site . The company bought the film at Sundance. The company has protested the “R” rating.

Here’s a Q&A by Michael Moore on the film.