"The Other City" examines HIV in Washington DC 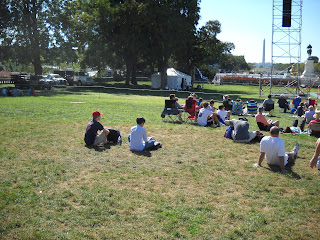 The indie video film from Cabin Films and director “Susan Koch”, “The Other City”, portrays the state of the HIV epidemic in Washington DC, where over 3% of people are infected. The film is written by Jose Antonio Vargas.

The film definitely portrays it as having inundated the African American community, with the sharing of needles in public places a major factor. In 2007, Congress was finally persuaded, despite “moral” concerns, to fund needle exchange without conditions.

The film shows an HIV shelter having long waiting lists and running short on funding.

The slow death of one gay Caucasian male, Jimmy, 35, is portrayed. Jimmy was infected by age 17, but over time the cocktail of protease inhibitors became ineffective. It’s obvious that at one time he was an attractive, active person. His mother is with him, and his former apartment is shown being cleaned out.

There is a young Americorps volunteer who is incredibly “attractive”, sort of resembling a couple of major celebrities accidentally.

There is a rehab support group called “Courage to Change”, populated mostly by African American men. The name is misleading; it has nothing to do with the ex-gay “movement”. I believe the website is this.

The film is being shown with digital projection in Landmark E-Street’s largest auditorium. But the late Saturday evening audience was small.