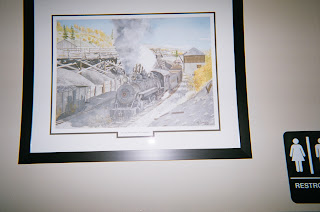 The film “Last Train Home” (directed by Lixin Fan), a kind of companion to “Up the Yangtze”, is a stunning docudrama showing the mass migration of Chinese workers from the cities home to the “countryside” for the Chinese New Year, which occurs in the late winter. Shot in 1.85:1, it could have benefited from wider screen, or even Imax. It takes you to China, and makes you feel you’re on another planet, similar to our life in many ways, but so fundamentally different socially, and so hectic and cluttered.

Specifically, much of the film deals with Changhua and Sugin Zhang, who left their kids in the care of their mother (the kids’ grandmother) for city jobs. The daughter Qin has grown into a rebellious teen, leading to a family blowup at the end of the film, caught by the documentary filmmaker.
The film covers the mass crowds and overselling of tickets, and delay of trains in a February blizzard.
The life in the countryside appears to have some of the trappings of the old Maoist past, from the cultural revolution.

The conditions in the Chinese factories are crowded and unpleasant, and the workers live in crowded dorms. Still, there is some shopping and entertainment, but their hours are much longer than those in the US.

The values of US consumerism are questioned. Only American men have 40-inch waistlines, it is said.

The film comes from Canadian production companies (including Eye Steel Film and cable TV) and has theatrical distribution by Zeitgeist.

Here is a clip about the film from the Toronto Film Festival.