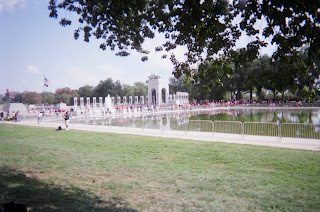 Meta-movies make for an interesting concept, particularly when you want to offer a lot of commentary or “ideology.” So it is with Cotton Marcus (Patrick Fabian), a not so extreme evangelical preacher in Louisiana who does exorcisms. He says if you believe in Jesus and Heaven you have to believe in Satan and demons. So he half-welcomes the chance to make a Dateline-style docudrama of “The Last Exorcism”, his last. The low-budget HD video film, directed by Daniel Stamm, comes from Studio Canal (France) and Strike and is distributed by Lionsgate as part of its horror series. The style of presentation reminds one of “Paranormal” and even “Cloverfield.”

That is supposed to happen in the bayou, at the home of Louis Sweetzer (Louis Herthum), whose teenage daughter Nell (Ashley Bell) has been behaving wildly, like an M.P., or perhaps like Regan in "The Exorcist".

Marcus has a partially deaf son and nice family himself (which the film lets dangle), and heads for the boonies. The car trips into the wilderness evoke a mood similar to like-minded sequence in Carter Smith’s horror flick “Bugcrush”, which I wonder if Stamm was familiar with. The teenage son Caleb (played by Texas youth Caleb Jones, who also composed a song for the score; I suspect we’ll see this young actor a lot; he reminds you a bit of Paul Dano) tries to chase them away and behaves rather assertively and independently. (Caleb says “I will hurt you”.) But eventually the exorcisms and docudrama start, and get pretty complicated. I’m not sure that the motel sequence works. But eventually we get to a conclusion and find out that Nell is going to deliver Rosemary’s Baby.

That of course asks who’s “guilty”. Louis tries to blame the boy at a nearby Cajun café, not knowing the boy Logan is gay (why the forearm shot?)

The official site from LionsGate is here .

Are “fake documentaries” more fun? (As I remember, “Blair Witch Project” used this technique, as did “The Last Broadcast”, the later about the Jersey Pine Barrens Devil). Let me add that the script here has a problem: sometimes Cotton is asked to turn off the camera, but the movie story goes on, with muted speech for a few seconds.

I suppose the docudrama approach could be an effective way to deliver a “political memoir quasi manifesto.” The protagonist writes a fictitious screenplay, in which a character like him relates many relevant episodes. Then the protagonist is fired and then sued over the screenplay, and in the course of the litigation tells the rest of the story, with acted backstory flashbacks. In this setting, the embedded screenplay introduces the “fake documentary” approach.

By the way, LionsGate will deliver “Saw 7” – that is “Saw 3D” this fall. This was inevitable.
Posted by Bill Boushka at 7:12 PM