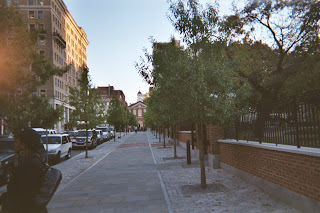 Now, the career of M. Night Shyamalan seems to have moved to writing, specifically his “Night Chronicles”,  which seem to be like English-class-ready short stories. Canadian director John Erick Dowdle has given us his “Devil” (Universal and Media Rights Capital), and right from the beginning, we’re back in Shyamalan’s Center City Philadelphia, upside down (as if from “Inception”), maybe ready for a Sidney Sheldon epic. Quickly, Dowdle ushers us into a Market St. 45 story building, with five protagonists on an elevator. It gets stuck, and the mayhem starts.

The setup of the story reminds me of “Nine Dead” (reviewed here April 22, 2010). Although the media is billing the idea that one of them may be the Devil (or that the Devil or Diablo is somehow present), and a security guard (Ramirez, Jacob Vargas) thinks so, what really gets interesting is how the police, particularly a rather charismatic Detective Bowden (Chris Messina) get to the possibility of connections among the characters from almost no evidence. It would spoil things to say too much, but the Mechanic (Logan Marshall-Green), one of the five, starts out as a rather solid character and becomes severely tested.

The film, shot 2.35:1, remains surprisingly expansive, moving outside the stricken lift and shaft for most of its brief 80 minutes. The music score by Fernando Velázquez is effective (a bit resembling that of “Inception”) and the closing credits offer what sounds like an orchestral ballet suite (my ear picked up the key of F#-minor), much in the style of Stravinsky.

Next time let’s have a scene at the Phillies’s new ballpark (and get MLB involved, legally).

As a senior in high school, I had a chess-playing friend who called himself “Diabolitch”.