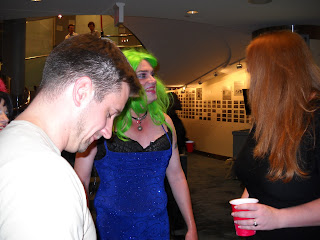 The DC Shorts Film Festival from September 9-16, 2010 is being held at Landmark’s E Street Cinema and the US Navy Memorial Theater (with its curved screen) near the National Archives. 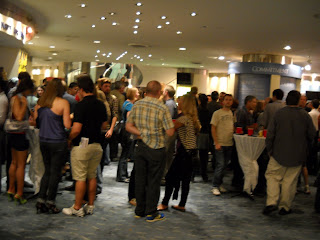 Last night, Program Showcase 4 included several films with as much substance as many features. The eleven films were shown in the sequence printed.

“Kosher Pig “(20 min, dir Eric Patton) starts with a girl of mixed Chinese and Jewish heritage in a confrontation with a handsome boyfriend (Steve West) in what appears to be a southern California town home. Gradually, in comic fashion with plays on words, ethnic tensions appear as she learns she was adopted by the Jewish family to rescue her from China’s “one child” policy that disfavored baby girls. 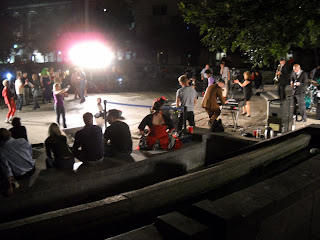 “The Moon Bird” (14 min, Myles McLeod, UK) is a curious avant-garde experiment with animation in black-and-white Cinemascope. A girl confronts a sorceress with the help of a bird from the Moon, with all kinds of weird bugs around.

“In the Hills of Deleij” (7 min, Paul Sage) sets up a confrontation in Darfur where a female UN photographer faces issues of self-defense and saving others. The film demonstrates the ethnic struggle and family ties in that society.

“Delmer Builds a Machine"(2 min, Landom Zakheim) A little boy ends the world with a Machine built from his toys.

“Lifeline” (16 min, Matt Hines, USA) aka “L1feline”. The film starts with Hines introducing the short. It is more like a play than a real film, mostly consisting of two men on telephones: one a young African American male working a suicide help line, the other a late middle aged man released from prison but confronting life as a registered sex offender. There is a connection between the two. Disturbing stuff.

“Out of Zinc” (2 min, Mattio Martinez, Germany). Watch your medicine chest (for aphrodisiacs). A gay ending.

“L.A. Bag Brothers” (5 min, Rick Glenn). A bit of dragnet, and some trench coat men who don’t like cats.

“Katrina’s Son” (15 min, Ya’ke Smith). This is the film that attracted me to the program. A little boy loses his grandmother, in front of his eyes, as Hurricane Katrina departs New Orleans. Later, in a San Antonio housing project, he has to confront a mother who rejects him. From Exodus films (link) , and a good example of filmmaking in Texas.

“Breathe, Focus, Octopus” (5 min, Pilot’s Crew). I guess that during zen meditation, telepathy works. One gay male character tends to dominate. No real octopus (or cuttlefish) shows up, but they have interesting body language.

“Your Lucky Day” (17 min, Dan Brown). This is a short film parody of the Coen Brother’s “No Country for Old Men”. Here, an old man shows up for a winning lottery ticket in a convenience store, and a young man tries to rob him, and all mayhem breaks loose. There is a lot of plotting and amoral behavior, even among the police, when they finally show up. I don’t know where this was filmed, but I wondered if it was Texas. Maybe plain old LA. In Cinemascope, this film showed the most advanced and professional filmmaking of the set.

The auditorium is very effective, but it did crop the screen for Cinemascope.

Afterwards there was a big reception inside the Memorial, and outside there was a jazz band.

I got to meet a filmmaker, Andre Dahlman, who has a film “Corner Plot” in Showcase 5, which I will not see. We talked about all the legal risks of the Internet and the problems documentary filmmakers face (both copyright issues and libel). Many projects don’t get done because of these problems. I suggested that the problem of “mass litigation” against computer users and now bloggers for copyright infringement would be a good subject for a documentary. (See “BillBoushka” blog, Sept. 8 and 10; see review here on Sept. 9 of “Going the Distance”.)

I believe the films in this festival are limited to 20 minutes. (That makes Carter Smith’s “Bugcrush” too long. I’d love to see it in a theater on a big screen.) DC Shorts’s motto is “Keep it short, keep it reel”, link.