"Clash of the Titans" makes Sam Worthington his own avatar, again 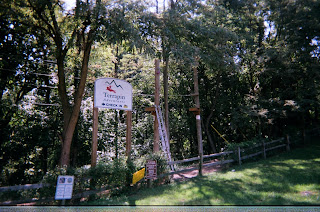 Well, Sam Worthington looked good in “Avatar” and he plays the super hero Perseus, son of Zeus, in Warner Brothers-Legendary’s UK production of “Clash of the Titans”, a remake of the 1981 MGM smaller flick, this time directed by Louis Leterrier. Media reports have the 3-D version as having been conceived as an afterthought, given its success in Avatar, and I wonder if 3-D is on its way to becoming standard. The 2-D on even the ordinary DVD is crisp and gets a lot of depth with motion.

One can “appreciate” the film as a bit like a Fox 50s spectacle, except that the color tone (the film was shot on Tenerife) stresses browns and grays. The Greek mythology, of individual gods battling the “Titans” (not a football team) seems a bit superfluous to western Christian audiences, and the Biblical spectacles seem more compelling to me. But Perseus plays the role of a Greek Moses, protecting the privileged Earth humans from the wars of the underworld. At the end, Perseus resists the temptation on the Mount (Greek equivalent), as he turns down a crown, and Zeus’s offer for him to become a god on Olympus. A god lives forever, Zeus says. Perseus winds up playing the role of a Clark Kent, with no red kryptonite around.

The special effects are based on a mythology that replaces today’s machine dreams.

AP released an embeddable video where actor Sam Worthington talks about the movie.

Shame on Warner Brothers for not playing its trademark Casablanca music as part of its grand entrance (it never does with Legendary pictures), so watch it here.
Posted by Bill Boushka at 7:47 PM

love your blogg, will you com check out mine? its www.liferandoms.blogspot.com if you interested will you follow me please, it would be a huge help, because im new at "blogging" haha thank you, much appreciated
jordan x