"The Black Balloon": a teenager "has to" take care of an autistic older brother 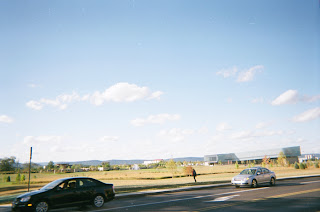 A recent film from Australia again dramatizes the idea of family socialization and the randomness of the way demands are made on people. This movie is “The Black Balloon”, from Australia (FFC) by way of NeoClassic Films, directed by Elissa Down.

Thomas Mollison (Rhys Wakefield) is bright and athletic, and turning 16, and wants a normal teen experience as he has his first girl friend Jackie (Gemma Ward), a swimming star and lifesaving instructor. His father Simon (Erik Thomson) is an Army officer who expects Thomas to take over the family responsibility that was dealt to him through his parents’ “activity”. That is, Simon’s wife Maggie (Toni Collette) is pregnant again and supposedly on bed rest, so she is supposed to be watched (somehow Simon’s doctor had advised against the vasectomy), but the big problem is autistic older brother Charlie (Luke Ford), whom Thomas must watch and collar all the time. Charlie has his toy balloon, which titles the movie. (Nope, it has nothing to do with the black balloons that show up in employee cubicles when they turn 40!)

Charlie is in fact difficult to control, at one point running into a neighbor’s house to pee. Thomas is challenged to manage his brother physically. At one point, Thomas blows up, and tells his mother, “I want nothing to do with him. He’s not my responsibility,” when she retorts “He’s your brother”. Thomas stays with the program. In one scene, he teaches Charlie to say “Monkey”.

Get the message. Parents believe they have awesome power , to instill in their kids that they “are” the family their parents created (and must “join in” with it) before they become their own selves. Accepting the responsibility that comes from family membership seems as necessary as taking responsibility for the children one sires. In an individualistic culture it doesn’t sound healthful or fair, just necessary; otherwise parents couldn’t take the “risk” of having kids at all. Dr. Phil had a show about this one time, and had a lot of trouble with the issue.

At the end, Charlie gets into a musical revue, by autistic kids, and that almost ends the movie. But the real “end” is in the bathtub, where Thomas must accept the innocent play with soapsuds on his own body. The last line of the script is really funny.

The film is described as a “domestic epic” and was shot 2.35:1, but the DVD from NeoClassic reformatted it to 1.85:1; I prefer that DVD’s match the original film. There is a short “The Making of The Black Balloom” that shows a few of the scenes as originally intended.

The story is set in the early 1990s, when social dynamics were a little different than they are now with the Internet and cell phones.