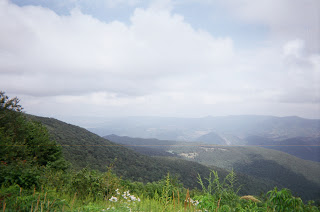 If you work abroad in the shadows, you have to cite a credible day job. Jack/Edward (George Clooney) tells local Italian villagers he is a photographer. In my novel manuscript (“Brothers, Too”) my character Randy is a history teacher most of the time. CIA agents and spies generally would make good high school social studies teachers. And the absences, in many states, can be covered easily by subs.

And in my manuscript, my protagonist’s employers want him to stay alive and health. There are signs be may be developing the bizarre disease they are tracking. I think that you would want to hold on to your agents if you expect an “Event” or “Another Blackout.”

Not so with Clooney. In fact, the movie “The American” (based on the novel “A Very Private Man” by Martin Booth) does not tell us who Clooney works for. He may not know himself. He just does hits. I suppose that the Russian Mafia is as good a guess as any for the friendly sponsor. The film opens with a particularly brutal hit in Sweden, and a plot context that might cross over to the “Dragon Girl” movies (Lizbeth, where are you? Oh, this film is too cleancut for tattoos and lesbians.)

So the film is what we say film should be: storytelling for its own sake.  Political agendas cloud the story. Yet, some of us can't resist them. Remember all those 70s thrillers, like "Chinatown" and "Parallax View"?  There was plenty of politics in the old thrillers.

Clooney insists that “this” (instance) is his last assignment. An old man and then Belgian woman (Thekla Reuten) gives him instructions as to what kind of weapon to build. (I didn't know you could build a precision rifle with free spare parts from an auto shop.) But the other characters are catching on. A cute young man (probably gay, and played by Finnish actor Samuli Vauramo – but not exactly a male “Lizbeth”) chases him but Clooney dispatches him in most opportunistic fashion. A kindly priest (Paolo Bonacelli), certainly above scandal himself, talks to George with both love and suspicion (like how good Clooney is with his hands.) And George isn’t supposed to make friends (and certainly isn’t supposed to go on Facebook), but Violante Placido plays the mistress who becomes his best confidante. She would have made a wonderful wife.  But she may just be too late, as Clooney figures out who the next target is (not hard to guess).  Clooney is no "Pie 'o' Pah", the interdominion assassin from Clive Barker's "Imajica".

The film is spectacular, intimate at times (in the Village), but with aerial shots of the highways that give the viewer a sense of an outsider (a technique not used in the comparable “Dragon” and “Square” thriller movies in theaters this year). (The film is 2.35: 1 and the aerial shots really would have benefited from Imax.) Focus Features is the distributor, as Universal treats this Quebec-Swedish-Italian production as foreign (about a third of the script is in Italian with subtitles). Dutch director Anton Corbijn directs (no DGC seal this time).

The small auditorium at Regal in Arlington at the 8:20 show Saturday night almost sold out. But the auditorium has to crop to show "2.35:1" aspect and the picture image is just too small. Wish this had been shown in a large auditorium.

Focus Features site for the film is here.