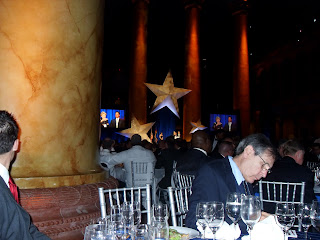 The Swedish comedy “Patrik Age 1.5” (aka “Patrik 1,5”), directed by Ella Lemhagen (and from Regent and Here!), presents the issue of gay parenting. 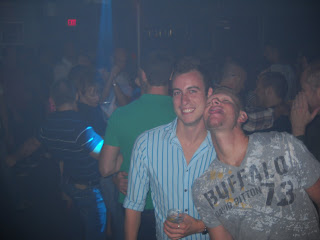 Two thirtyish gay men, an attractive slender doctor, Goran (Gusttav Skarsgaard) and security man Sven (Torkel Petersson), married legally and living in a postcard suburb of identical gingerbread houses, seek to start a family by adopting a foster infant. But a bureaucratic snafu mistakes the age and the kid Patrik (Thomas Lungman, a young actor to watch) turns out to be a homophobic delinquent at 15. But Patrik has real skills (gardening, and skateboarding, as if he could become the next Shaun White). After the relationship goes south and Sven leaves because of the tension of the situation, Patrik starts becoming attached to Goran, who acts as a real father and makes Patrik believe that with school and discipline he can have a good life. When a “traditional” family becomes available, Patrik wants to stay with Goran, and Sven comes back.

The film is shot in HD video full aspect ratio (2.35:1 Panavision Digital), and looks sharper than most 35 mm film. The setting of the village is rather stagey and artificial, but the surrounding countryside is interesting, just as in the Swedish “Dragon Tattoo Girl” movies which seem to have been filmed in the same area.

Despite the liberal Swedish society, there is scattered homophobia from the rest of the community. In one sequence, a straight man doesn’t let Goran do a prostate exam, and soon finds out he has advanced cancer.

An early Friday evening show at Landmark E-Street in Washington DC was about 2/3 full in a small auditorium.

The film reminds me of the 1995 book "Getting Simon", from Bramble, by Dr. Kenneth Morgen, where a gay male couple, one of whom is a physician in the Baltimore area, adopts a boy.