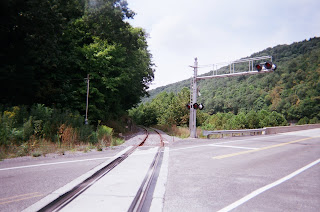 The South Korean film “Mother” (“Madeo”), directed by Joon-ho Bong, presents a thriller and small town mystery based on momism, but with the natural human ambiguity so common in Asian cinema, rather than with the crisp irony of a Hitchcock film (like “Psycho”).

Yoon do-Joon (Bin Won) is a 28 year old man considered mildly retarded or perhaps somewhat autistic (he was apparently poisoned as a child), living with his mother (Hye-ja-Kim) in a relationship that looks a little oedipal to westerners. The film makes a lot of her practice of acupuncture. When a young woman is found slain, he is arrested for the crime, and a public defender is appointed, who works poorly. So Mother goes out and gumshoes to save him, and show how he was vulnerable and framed.

The boy's relationship with Mom would be offputting to some. Really, his demeanor is generally pretty "normal" but he seems an outcast because of his offline reputation. When asked by a chum Jin (below) if he has ever been with a woman, he says he has slept with his mother, which he does. In one scene, his mother feeds him while he is relieving himself along a public street, creating a moving long shot after he leaves. Mother fears he cannot feed of take care of himself, and feels responsible.

Technology plays a role in the plot, as the victim had made cell phone videos of her activities, leading to clues for the police, as well as playing into the well known social controversy surrounding teen “sexting”.

The setup of the framing is sudden (occurring almost at the beginning of the film), involving a hit-run accident, and Yoon’s chasing the car with Jin-tae (Ku Jin), vandalizes the car at a golf course, and picking up a golf ball (not a good idea), which then, slightly later (and after the cops write off the hit-run and vandalism as canceling each other out) connects him with the female victim after he encounters her at a local bar and follows her to a house, and then she shows up slain on the roof of the abandoned house. Some viewers have questioned some detailed plot inconsistencies dealing with the boy’s capabilities. He does, however, leave at the last moment and apparently doesn't enter.  This whole sequence, lasting about 20 minutes, flows quite naturally and convinces the viewer how vulnerable to boy is to circumstance that he doesn't quite get, and actions whose possible consequences he doesn't see.

The film has an intense mood, with a sizzling orchestral score, creating an atmosphere a little bit like that of the Millennium movies.

The rental DVD has a half-hour short (some of it in BW) on the making of the film, and an interview with composer Byeong-woo Lee, who explains how he uses a theme with upper melody in Major ("CBABG") and accompaniment with a minor triad to create the emotional effect. The orchestral writing sounds schmaltzy, rather like Richard Strauss in spots.


I could not find this film on Magnolia’s site.