"Le Concert" explores the politics of music in the former Soviet Union; a stirring climax with Tchaikovsky's Violin Concerto 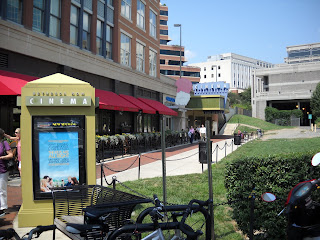 The French-Roumanian-Russian film “Le Concert” from Radu Mihaileanu (distributed by the Weinstein Company) is a meditation on social and political redemption through music, but it is also somewhat a feel-good experience in the tradition of “Mr. Holland’s Opus.”

Back in the 1970s, Andrei Simoniovich Filipov (Aleksei Guskov), conductor of the Bolshoi Orchestra, had been fired for hiring Jewish and gypsy musicians (showing that the post-Salinist Soviet Union followed some of the same prejudices as the Nazis). Today he is a "proletarian" janitor, not allowed to even see the performances until his work is perfect. But when the orchestra, now in Paris, has a vacancy, he gathers together the old musicians for a special concert. And his choice for solo violinist Anne-Marie Jacquet (Mélanie Laurent) has, through her family, a special connection to the past gulags.

The first part of the film takes place in Moscow, and gives us an on-location sense of what the city is really like. (The land around it is very flat.)

The work for the concert is the Tchaikovsky Violin Concerto in D. In the final concert, the orchestra stumbles and plays the introduction out of tune, but gets itself going and turns out a memorable performance. The movie telescopes the concerto, distracting for moviegoers who know the concerto by ear, short circuiting the great climax at the end of the first movement. It would have been possible to consider playing the entire 35 minute work and extending the movie by 20 minutes or so (then it would be just over two hours).

The movie has a scene where a vinyl record from 30 years ago of Filipov’s performance on Mahler’s First is played (the third movement). It uses plenty of other classical music, including the slow movement of Mozart’s 21st Piano Concerto. (Will a movie try the 26th with some polytonality? Look at my June 20 “drama blog” post.)

The back story of the movie, often told in black-and-white flashbacks (the film is shot in Cinemascope) reminds one of the politicization of music in the former Soviet Union under Communism, probably best known to many music lovers with the music of Dmitri Shostakovich.  The film will be especially pleasing to "conservative" audiences.

Amost as much of the film is in Russian as in French.  Some of the indoor scenes were filmed in Roumania, Belgium, and probably the Czech Republic (the Czech Philharmonic is used).

The Sunday afternoon showing at the Landmark in Bethesda MD was about half full.  Why is this important film in only one theater in the DC area when it comes from a major indie distributor?