"Jeepers Creepers" follows the script of one of my 1998 dreams; with Coppola, you never know! 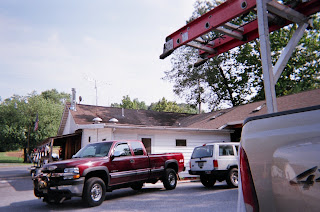 CWTV seems to run an “MGM Showcase” in the summer, and I checked out “Jeepers Creepers” which I had not accidentally missed. I could say with Francis Ford Coppola and American Zoetrope involved (Victor Salva directs), you never know. I’d odd to see them involved with what seems like brainless horror (it comes from MGM/UA; it could have come from Dimension). Except that there is more point to it than I thought.

Darry (Justin Long) and older sister Patricia (Gina Phillips) are driving back from spring break through the northern Florida panhandle flatlands, when they start getting chased by “road warriors”, big evil rigs. Then they see a wrapped body being thrown down a chute near an abandoned country church. Darry does the geek “Justin Long” thing and decides he has a moral duty to investigate.

What follows is a chase where both kids and the cops do dumb things, while a demon with a pitchfork falls out of the air, looking for people to eat for body parts. Now, Justin Long is just too nice a kid for anything bad to happen to (I mean, he is absolutely perfect, like Christ), except in an American Zoetrope movie. You never know.

The imagery of the demon brings back a dream I had of a movie script/novel while I lay in a University of Minnesota hospital in early 1998 recovery from an acetabular fracture. I dreamed that the likeable protagonists had to go on a “nighthhike” and meet for a “tribunal” by some sort of pond where a UFO landed. (It was to happen in Wisconsin, near the Sparta bike trails, of course.) A “demon” like the one in this movie sets it up; some of the young men survive intact and others don’t. Then the second half of the movie has those that didn’t make it in some kind of Purgatory in a city in a parallel universe (call it Imajica), with no real life there that moves forward with any kind of self-expression; the characters must constantly move back in time, and relive things before the “tribunal”, but they keep on finding out that the laws of physics won’t let them change the outcome (because of the concept of a “time arrow”). All the while, the Demon floats above them in the sky, mediating the outcome (rather like “the Walkin’ Dude” in Stephen King’s “The Stand”, a TV miniseries in 1995). Finally, everyone learns their fate for eternity, some of them to live in a circular tunnel with no exit forever.

The jazz song “Jeepers Creepers” is catchy. I you hear it, you know that the Boogeyman is nearby and after you.

The “Boogeyman” image is telling for another reason. As I’ve related on other blogs, when I was living in a dorm at William and Mary in the fall of 1961, a suspected homosexual was viewed as a “boogeyman”, ready to feast on other men. That is honestly what some people believed in those days, a prejudicial urban legend that would help set up the debate over “don’t ask don’t tell” in the military three decades later. It’s interesting what old horror films (especially from Coppola) bring to mind.

Picture: Daniel’s, a bike bar south of Baltimore MD.
Posted by Bill Boushka at 9:17 AM