"The Girl with the Dragon Tattoo", first of the Millennium series from Sweden 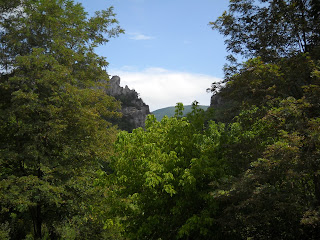 The first film of the Swedish “Millennium” trilogy (from Music Box and Yellowbird) is the now renowned “The Girl With the Dragon Tattoo” (“Man som hatar kvinnor”), directed by Niels Arden Opley. But I saw the second film first, and this one, filmed in full Cinemascope and longer, seems to establish the style of the trilogy more decisively.

Right at the outset, we know that the thrillers, based around some particular characters, most notably lesbian computer hacker Lisbeth Salander (Noomi Rapace) and publishing magnate Mikhael Blomkvist (Michael Nyqvist) have a political import. The media is reporting Mikhael’s conviction for criminal libel, and impending jail time as well as punitive financial settlement. It’s pretty unusual for people to go to jail for libel (maybe less so in Europe than the US), so you think there’s a point. It seems that Mikhael has made enemies, and was set up by an industrialist with false evidence so he could be accused of libel, but the industrialist was actually guilty, just based on other evidence. Mikhael’s own family, even siblings, are put at risk. That’s a heavy point.

Enter Lisbeth, who is working for an investigative firm as a hacker, who determines Mikhael was framed. But Lisbeth has been let out of a mental hospital, and, even though an adult at 24, has to listen to a brutal “guardian” to spend her own money. She has to fight him off.

Meanwhile, Mikhael (on bail with six months before his sentence) gets hired by another elderly industrialist, Vanger, living on an island, with a complicated family history, with a 40 year old disappearance to solve. Vanger suspects foul play, and it is one of those “Clue game” (or maybe “Mr. Ree”, a 50s board game everyone has forgotten) problems where the family members (about 30 of them) are like game tokens. Lisbeth contacts Mikhail and forms an alliance, to get away from the guardian, and helps him solve the mystery. And, yes, there will be some twists at the end.

This is a grand film, almost like “Shutter Island” or “Ghostwriter”, and you almost expect to see Di Caprio walk on; the brooding music reminds one of the mood of “Inception”. The film has a flashback (involving a “crime” Lisbeth did commit on her abusive father) that will become more important in Film 2 (reviewed here July 25).

The film is still showing in some AMC theaters, despite DVD availability, and it was half full at a Saturday early evening show in Arlington VA. The Music Box link is here.

When I first heard about the film in the spring, the title was a bit of a turnoff personally. The film is much more that the genre piece that I first envisioned.