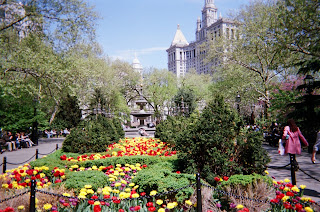 Back in the 50s, television game shows used to offer a choice between Rome, Paris and London as destinations of prize trips, so it seemed at first that Elizabeth Gilbert’s choice of Italy, India, and Indonesia as destinations for her “year off” seemed a bit arbitrary, although in the long film “Eat, Pray, Love”, the segments (rather seeming like separate documentary episodes on the National Geographic Channel) seemed to mesh.

The film, directed by Ryan Murphy and from Columbia Picture (and Plan B), looks so grand that I wondered why it was filmed in “only” 1.85:1; it seems to deserve Imax. The volcano scene in Bali was most striking and perhaps prescient. Curiously, the film’s style, though, suggests it wants to be appreciated as if it were an indie.

Everyone knows by now that the movie is based on a memoir by Elizabeth Gilbert (Julia Roberts) after her divorce which followed difficulty in conceiving. It seems rather self-indulgent, as if Gilbert should have watched Tracey Jackson’s “Lucky Ducks”. Gilbert has the luxury and good fortune to study her own feelings. (The title of the book was “Eat, Pray, Love: One Woman's Search for Everything Across Italy, India and Indonesia”; okay, the three words in the title do map to the three destinations).

The most interesting part dramatically is probably the middle, in India, where Gilbert has to pay her dues by scrubbing floors, something expected of every resident of the ashram. It sounds almost like rehab.

She starts getting some real life back in Bali (I saw this film right after seen “South Pacific” on PBS yesterday); the script made an odd reference to the 2002 terror attack. Javier Bardem is about as convincing as a future husband as was Billy Crudup or James Franco as a boy friend back home in New York.

I liked Julia Roberts better as Erin Brockovich than as Elizabeth Gilbert. But I guess I’m supposed to.