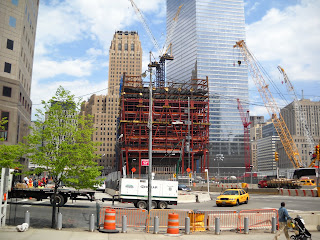 The Weinstein Company and IFC films offer the DVD of Julia Loktev’s reality film “Day Night Day Night”. The title refers to the 48 hours of agonizing drills and detail as an unspecified “She” prepares to end all experience on Times Square. That’s putting it gently. We don’t know what organization “She” represents or why she “believes” so fervently. We just see what she goes through, down to the detailed hygiene and all the cramped, latrine drills.

There is a sequence that reminds one of “Phone Booth” where she struggles to make connections through a pay phone, and then has to panhandle to get more quarters. She’s been told to pull pin if anyone suspects, and on NYC streets she gives plenty of opportunity to attract suspicion. This 2006 film is agonizing to watch.

One wonders if Faisal Shahzad could have known about this film or watched it.

Compare this to the film "Making Of" reviewed here July 23.