"BoyCrazy" is an LGBT musical "short subject", in the format of a full operetta; a note about Reel Affirmations DC 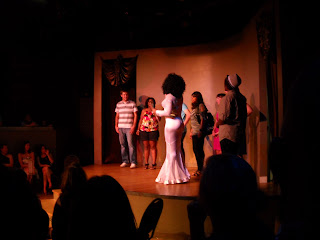 70% of the lines are sung, so the film is almost an operetta, with music by Trevor Cushman, very major-keyed and a bit saccharine. James May plays a late 20-ish HR head in an LA company who makes new “friends” in the workplace john (above board), and whose behavior is definitely not to be copied in real life. And it doesn’t seem he is monogamous.

Despite the “short” nature of the film, it feigns an “Intermission” (with a non-drag can-can revue) and a Part I and II, and even a Reprise.

Logo has gotten harder to navigate lately, and the films load slowly, at least for me, on normal cable broadband. Many of the old favorite shorts (like “Bugcrush”) are gone.

The link for this film is here.

A film like this would normally be screened at DC’s Reel Affirmations festival, which has been reported as postponed until Spring 2011 (GLBT blog, Aug. 2). However the “OneinTen” home page still has it listed for October 2010 (link ).