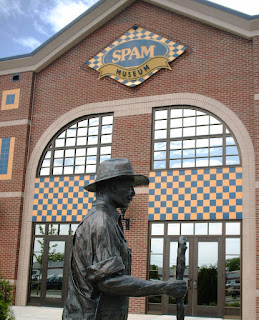 The documentary “American Dream” from Barbara Kopple and Cathy Kaplan, from Miramax Films (1991), covers the six-month strike against Hormel at Austin, MN in 1985-1986, by P-9 of the Food and Commercial Workers. The company tried to impose a $2 wage cut in a contract, to become more competitive during “Reagonomics”. Unions were already getting weaker, given Reagan’s defiance of the air traffic controllers in 1982.


The international union disagreed somewhat with the local, and the company took advantage of the situation, first using management to keep the factories open, doing “proletarian” assembly line jobs (making “spam”, just as in the movie “Sophie’s Choice”), and bringing in “scabs”. Existential battles and debates ensued, as families were threatened with losing everything. Eventually, with a settlement, the negotiators had to deal with the delicate problem of whether some people who had tried to exercise a “right to work” should be paid the same.

The film should not be confused with the 60's thriller "An American Dream" reviewed here July 6.

The DVD also contains a sixteen minute short “Children of the Night” directed, written and narrated by Marion Wiesel and (according to the film itself) also directed by Jolanta Dylweska. The film shows the plight of children in Nazi concentration camps. The children were not looking for peace or love, only lettuce, the film says. The background music consists of a movement from Bach’s Suite #5 in D Minor for unaccompanied cello.

Many high school English classes require the short version of Emil Wiesel's "Night" as mandatory reading around ninth grade. Teachers, kids, take note: school is starting!
There is a site for the Czech version of the short film here.